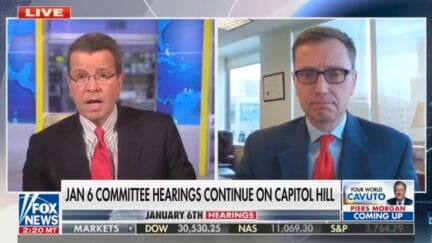 Reporter Chad Pergram summarized the proceedings and recalled that Trump and his team had leaned on various Republican officials to change the outcome of the 2020 presidential election, which he lost. Trump has baselessly stated the election was rigged against him.

Among those officials was Arizona House Speaker Rusty Bowers, who told the committee: “I said, ‘You’re asking me to do something that’s never been done in the history of the United States, and I’m going to put my state through that without sufficient proof?’”

Pergram explained how the Trump campaign even attempted to send fraudulent slates of electors to then-Vice President Mike Pence, who presided over the certification of the election.

Cavuto turned to Thomas Dupree, who served in the Department of Justice under President George W. Bush.

“Tom, you’re a lawyer and a great one,” Cavuto began. “And I’m not, but this just seems to make Donald Trump look awful. Just awful.”

Dupree said the committee focused on the links between Trump and the effort to send slates of fake electors to be recognized.

“It seems to be a real theme that the committee members are trying to bring out in their statements and their questioning to show that the former president wasn’t just a bystander or that people that work for him were trying to do this, but that the president was a central player in all of this,” Dupree said.

Dupree added that it’s unclear whether Trump truly believed his false claims that the election was stolen from him.

Cavuto asked, “If you knowingly make statements you know aren’t true and they’re proven untrue and yet you still make the statements – maybe because you’re totally and personally convinced you’re on the right and they’re on the wrong – at what point does that cross a constitutional line and maybe a legal one?”