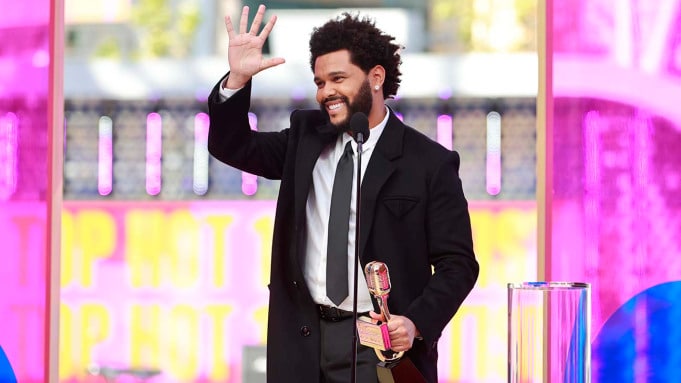 He also won the first award handed out on the live telecast, for top Hot 100 artist. Appearing in a black suit and coat, he joked, “Thank God I don’t have to wear that red suit anymore,” a reference to the outfit worn by a “character” he appeared as for several months after dropping his album After Hours in various videos, late-night appearances, awards-show performances at performing at the Super Bowl halftime show. The continuing storyline followed a man on a night gone wrong, then on a violent streak, later with bandages showing first his injuries then later signaling a message about plastic surgery in Hollywood (in one video, he sings on stage after obvious facial surgery).

Later in the show, The Weeknd performed “Save Your Tears” in a Los Angeles parking lot, with drivers of several cars and 18-wheelers doing choreographed movements to the song.

Lil Rel Howery presented The Weeknd with his top Hot 100 artist award, joking that he got Glenn Close to dance to “Da Butt” at the Oscars and said if he saw Barbra Streisand later Sunday night, he was going to get her to do the “Tootsie Roll.”

Meanwhile, DJ Khaled ft. H.E.R. and Migos kicked off the 2021 Billboard Music Awards on an outdoor stage in downtown Los Angeles on Sunday night with scores of fans in attendance.