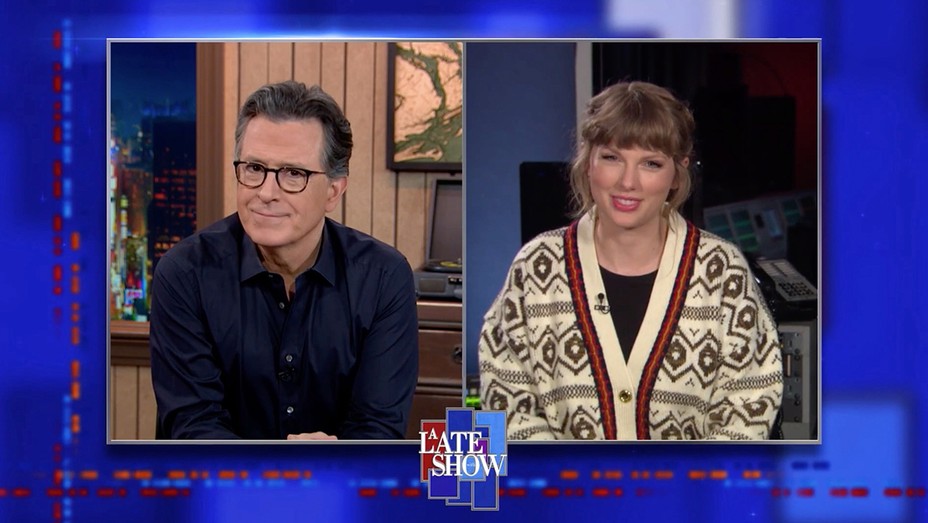 Taylor Swift made an appearance on The Late Show on Tuesday night to set the record straight about who the Stephen is in her song “Hey Stephen” from her Fearless album, which is part of the songbook that is being re-recorded by the singer.

Colbert expressed the opinion that the song is about him, and pressed Swift for confirmation. “I recorded that song in 2008, I think I was like eighteen,” she said, dismissing the suggestion. “Right, and I was also a younger age,” said the late night host. Swift then proceeded to tell him the exact age he was in that year: 44 years, 179 days old, give or take several hours.

Colbert pressed the singer again: “Are you sure ‘Hey Stephen’ isn’t about me?” Swift replied, “It’s just the power of music Stephen, good songs make you feel like it’s about you.” Speaking of getting back into the “right headspace” to authentically re-record the song, Swift brought out her old mood board, which consisted of pictures of Colbert.

Yet she continued to explain how the song was not written about him. “Hey Stephen is not about you any more than my album 1989 is about that year you spent waiting tables on the lunch shift at [an Italian restaurant] in the river north area of Chicago that by the way serves a really incredible slice of pizza.” She pointed to a photo of pizza on her mood board.

At this point, Stephen demanded to know who the song is about. “If you really want to know who it’s about, and that seems to be the case. I’ve never revealed this before to anyone, but ‘Hey Stephen’ is about Stephen King,” said Swift.

The singer went on to say, “He’s amazing. The Dark Tower series changed my life, plus The Shining, The Stand, and don’t even get me started on his short stories. Absolutely luminescent.”

As the two continued going back and forth, Swift explained what a real song about Stephen Colbert would look like. “It’s too obvious to call it Hey Stephen… Songwriting is all about the details so you go, ‘Hey Stephen, I love you on the TV, and all the stuff you did on the daily show and that time you were on Law & Order, you’re 5’11, your middle name’s Tyrone, social security number is 3… “After cutting her off as she called out numbers, Colbert exclaimed, “No matter how much you say that ‘Hey Stephen’ isn’t about me, I keep getting the strong feeling that it is.”

“That seems like a you thing, for you to sort of process. But the thing about that feeling that maybe you should address within yourself; I think it’s something that you should process and then take the feeling that you’re feeling and just Shake It Off. Right? But that song, is about you.”