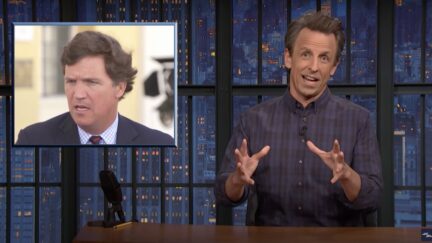 Seth Meyers watched the promo for the new season of Tucker Carlson Originals and he’s as shocked by the promotion of “testicle tanning” as just about everyone else.

For those who managed to avoid the viral clip, Tucker Carlson’s new special, “The End of Men,” promotes a practice called “testicle tanning,” which describes the practice of shining a UV light on one’s genitals in order to potentially increase testosterone.

Carlson’s promo included a clip from an interview conducted with physical trainer Andrew McGovern, who highlighted the mental health benefits of shining a light on one’s testicles.

After airing the clip, Meyers joked that viewers of “a Tucker Carlson special on Fox’s streaming service titled The End of Men” are likely “down to clown with just about anything.”

“I would venture half his audience was saying, ‘I have to try that’ and the other half was saying, ‘Testicle tanning? Tell me something I don’t know. I expose my nuts to red light therapy every day,” Meyers quipped.

“‘Sometimes I just drop ’em straight into the toaster and let them warm up for a few seconds. If you really want to be an alpha man, you just got to stick your entire junk in the microwave and put it on popcorn mode that’s just — you’re advanced.’”

Carlson later welcomed an incredibly confused Kid Rock to his show after airing the promo, who opened with the line, “Dude. Stop, stop. Dude, stop. Testicle tanning? Come on!”

“When you’ve lost Kid Rock …” Meyers cracked after airing the clip, noting that the idea of tanning one’s testicle was too “insane” for the singer to comprehend.

“The best part is, they laugh about it like it’s a joke, but then Tucker doubles down and says, ‘No, seriously, why not consider it? Hell, why stop at red light therapy? Maybe in addition to light, your testicles need air, which we could generate using ‘windmills,’” Meyers joked, using a clip of former President Donald Trump saying the word “windmills.”

The host then hit at conservatives who are hesitant to take the Covid-19 vaccine, yet would consider the “bromeopathic” practice.

Days Seem Numbered for CNN+, but Could Its Shows Live On?