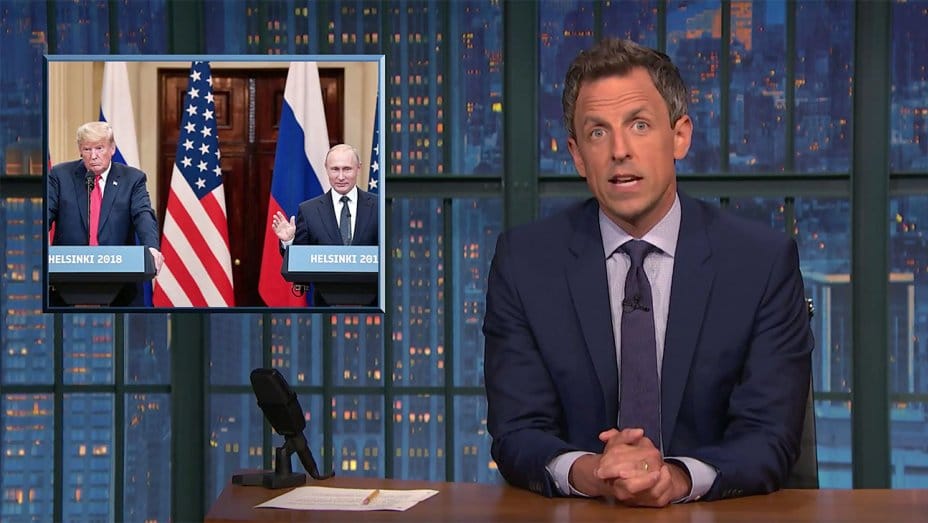 Meyers began the segment by running through the “disastrous” nature of Trump’s trip to Europe before even getting to Finland, including the NATO summit and his infamous state visit to the U.K. where he undermined British Prime Minister Theresa May, then broke royal protocol in his meeting with Queen Elizabeth as well as his numerous gaffes over what Brexit meant.

The segment then moved on to the Helsinki Summit, with Meyers noting that “before and during the summit Trump was very eager to impress Putin,” by slamming America’s allies in NATO as well as bizarrely describing the EU as a “foe.”

Once in Finland, Meyers said that Trump offered Putin “nothing but gushing praise for Russia’s hosting of the World Cup” before things became “surreal” when Trump “twisted himself in knots to take Putin’s side” against the U.S. intelligence community and the Justice Department over Russian interference in the 2016 election.

Meyers ran through a stunning series of clips from the press conference of a “thirsty” Trump rambling about Hillary Clinton’s emails, the Democrats, the lack of collusion and Putin’s “strong and powerful denial” over interference. “It’s only a matter of weeks before he Single White Female’s Putin,” Meyers said about Trump’s devotion to Putin.

With Trump’s public capitulation to Putin, Meyers wondered what the two leaders said in private. “I’m worried he [gave] Putin one of the 50 states,” he joked.