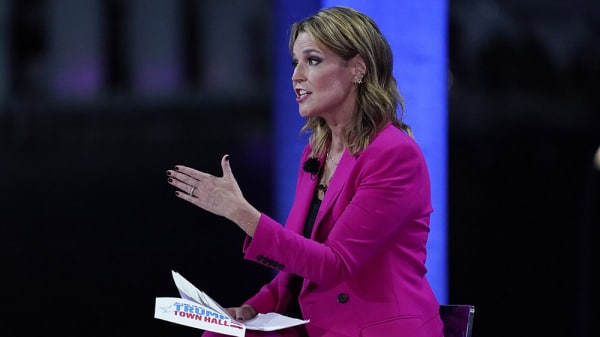 In what may be the performance of a career, the popular “Today” anchor kept a tight rein on the proceedings of a controversial town-hall event in Miami with President Donald Trump that put the network’s parent, NBCUniversal, in the cross-hairs of critics and Hollywood A-listers. Many consumers have rebuked NBC for its decision to put Trump opposite a similar discussion his Democratic challenger, Joe Biden, had with ABC News and George Stephanopoulos at the same time, a sign of how fractured the 2020 race for the Oval Office has become. Both candidates moved away from a second debate planned by the Commission on Presidential Debates after Trump became infected by coronavirus.

For just under 60 minutes on NBC, Guthrie held Trump to account, asking him if he in fact had contracted pneumonia while infected; why he had a problem making a definitive dismissal of white supremacy; telling him he had no legal defense against the release of his much sought-after tax returns: and asking him to denounce conspiracy theories held by some of his backers.

“Let me ask you about QAnon. It is this theory that Democrats are a satanic pedophile ring, and that you are the savior of that. Now can you just once and for all state that that is completely not true?” she asked

“I know nothing about QAnon,” Trump responded.

“I just told you,” said Guthrie.

She kept the president to short answers and, after he responded to various citizens in place to ask him questions, added fact checks and follow-ups. Even close observers of the news industry and the current outrageous political cycle gave her kudos. “I’m impressed with Guthrie’s preparedness so far – she’s been ready for some of Trump’s regular false claims,” said Daniel Dale, the CNN fact-checking correspondent, via Twitter.

Guthrie has never been under such an intense microscope, even when NBC’s “Today” was in the midst of crisis as her former co-anchor, Matt Lauer, was removed from the program in the wake of accusations of inappropriate sexual behavior were levied against him in 2017. On Thursday night, she served as the representative of a media company that made a decision many critics believed was not in the interest of the people who watch it or the public its large NBC broadcast network is supposed to serve.

President Trump spent part of his day Thursday casting aspersion on NBC News and journalism, declaring he was only going to do the town hall because it represented “a free hour of television.” After the broadcast was done, his campaign called Guthrie  a “debate opponent and Joe Biden surrogate” – even though there was no debate taking place.

During a preamble conversation to voters’ questions, Guthrie used the welcoming, conversational style of a morning-news show to prod President Trump to explain himself on a range of non-traditional stances he has taken and false statements he has made. “How severe were your symptoms – in particular did you have pneumonia?” she asked him when discussing his recent coronavirus infection. “To be clear, there is no law or rule that prohibits you from releasing your tax returns,” she told him as he revived an old excuse about his taxes being under audit. “‘You’re the president, you’re not like somebody’s crazy uncle who can retweet whatever,’” Guthrie told President Trump after asking why he recently retweeted a conspiracy theory.