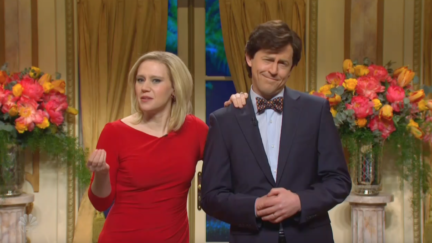 The segment, titled “Fox News Ukrainian Invasion Celebration Spectacular,” was filmed in Mar-a-Lago. The television host duo said they were hosting a fundraiser to raise money “for the real victims of this invasion: the oligarchs.”

The pair said they are sending Fox News care packages to every Russian soldier that include a MyPillow, a six-month subscription to LifeLock, and ten American flag catheters.

“We got into a little bit of trouble for all the nice things we said about Russia and the mean thing we said about Ukraine,” Carlson, portrayed by Alex Moffat began. He added moments later, “I kept asking why do we hate Putin? Aren’t liberals in America even worse?”

Kate McKinnon‘s Ingraham then chimed in: “And I called the president of Ukraine pathetic. He stayed and fought with his people in the war and I called him pathetic from a news desk in Washington.”

Carlson went on to solicit donations, saying, “Because this is Fox News, you can either send money or take out a reverse mortgage.”

The hosts then featured parodies of former President Donald Trump and martial artist Steven Seagal, before allowing Donald Trump Jr. and Kimberly Guilfoyle to grace the stage with a duet you can’t unhear.

Set to the tune of Lady Gaga and Bradley Cooper‘s “Shallow,” Guilfoyle began singing, “Tell me something boy, don’t you love that big Russian convoy?”

“…In the sha-ha, sha-ha-llow,” the couple harmonized. “We’re far from the shallow now.”

Before being cut off by Carlson, Guilfoyle sang: “I’m off the deep end, we should take Ukraine. It’s way more white than Guam.”

After a brief interruption to inform attendees someone’s yacht with a license plate reading “no means yes” in Russian was being towed by NATO, James Austin Johnson appeared again as Trump to perform a Valentine’s song for Putin.