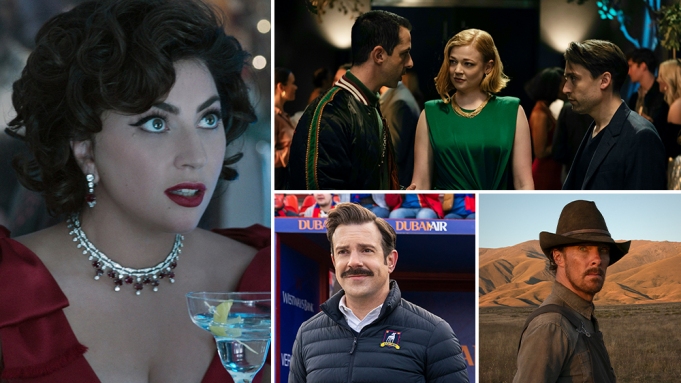 Ridley Scott’s “House of Gucci,” a rococo look at wealth, murder and haute couture, and Jane Campion’s “Power of the Dog,” a revisionist Western about toxic masculinity, led all films with three nominations. However, “Power of the Dog,” which has benefited from a big awards push from Netflix, failed to capture a best ensemble nomination. Nominees for that prize, considered to be the most prestigious handed out by the guild, included “House of Gucci,” as well as “Belfast,” “CODA,” “Don’t Look Up” and “King Richard.”

On the television front, “Succession,” a boardroom drama about the family behind a media conglomerate, and “Ted Lasso,” a feel-good soccer comedy, scored a leading five nominations. “Mare of Easttown,” “The Morning Show” and water-cooler phenomenon “Squid Game” each landed four nominations apiece.

The best ensemble in a drama series race will be between “The Handmaid’s Tale,” “The Morning Show,” “Succession,” “Squid Game” and “Yellowstone.” It marks one of the few major awards that “Yellowstone” has been nominated for during its four-season run and comes as the show continues to be an unmatched ratings juggernaut.

“The Kominsky Method,” “Only Murders in the Building” and “Ted Lasso” will face off for the best ensemble in a comedy series prize.

As expected, stars like Will Smith (“King Richard”), Lady Gaga (“House of Gucci”), Olivia Colman (“The Lost Daughter”), Jeremy Strong (“Succession”) and Jennifer Anniston (“The Morning Show”) will wake up on Wednesday to find that they made the cut (if they weren’t brewing coffee already). But several actors who had been widely expected to be nominated were shut out, replaced by performers who had been largely dismissed by the cottage industry of pundits and prognosticators that has sprung up as part of an ever-expanding awards season industrial complex.

Kristen Stewart, considered to be a front runner for her shape-shifting turn as Princess Diana in “Spencer,” failed to earn a nomination, while “King Richard” standout Aunjanue Ellis and “Belfast’s” Jamie Dornan were also snubbed. At the same time, Ruth Negga, who has been largely overlooked for her subtle work in “Passing” by other awards bodies, scored a nomination for best supporting actress, while Bradley Cooper earned a nod for his fiery turn as producer Jon Peters in “Licorice Pizza” — a performance that was heavy on impact, but light on screen time.

And while the television nominations were slightly more predictable, there were a fair share of upsets. Issa Rae failed to earn a nomination for her work in the acclaimed final season of “Insecure,” while “Only Murders in the Building’s” Selena Gomez was overlooked, even as her co-stars Steve Martin and Martin Short were both recognized for their work in the Hulu hit.

In recent years, Hollywood players have moved aggressively into the streaming space, investing heavily in movies and shows as they look to challenge Netflix. That push was reflected in Wednesday’s SAG nominations. WarnerMedia topped all companies with 18 nominations across both film and television — a list of nominees that comes from its motion picture arm, Warner Bros., as well as its cable and streaming divisions, HBO and HBO Max. WarnerMedia’s tally increased even more when the shows it produces for other distributors such as Apple and Netflix such as “Ted Lasso” and “The Kominsky Method get factored in, which pushes it total to 26 nominations. Netflix was close behind with 17 nominations in both television and film categories, while Disney had 13 nominations thanks to both its movie studio and Hulu and Disney Plus, its streaming services.