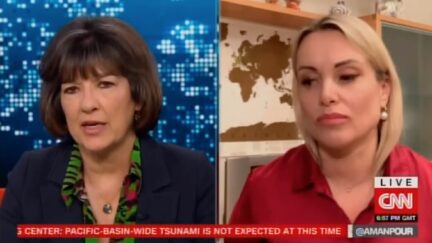 Journalist Marina Ovsyannikova gave an interview after being released from the Russian authorities, wherein she reflected on her bold decision to protest Russia’s war against Ukraine on live television.

Ovsyannikova spoke to CNN’s Christiane Amanpour on Wednesday, who asked the Channel One editor what drove her to break into her state-run network’s live broadcast with her anti-war poster. Ovsyannikova explained that she was mulling her decision to protest for some time, but “lately I have been feeling a cognitive dissonance, more and more, between my beliefs and what we say on air.”

“It was a growing sense of dissatisfaction that crept increasing every year, and the war was the point of no return, when it was simply impossible to stay silent,” she said. “I realized that I would either need to do something, or we will reach a point of no return.”

Ovsyannikova also told Amanpour about how she got onto the anchor set, and how she positioned herself to make sure her poster would be seen.

“I decided that I would be able to overcome the guard who stands in front of the studio, and stand behind the host,” Ovsyannikova said. “So I moved very quickly and I passed by the security and showed my poster.”

As Ovsyannikova’s protest made headlines around the world, she was taken into custody by the police, which sparked initial concerns for her safety because of Russia’s crackdown on journalists and political dissidents. When she was released from detainment, she told reporters she was put under a lengthy interrogation, and that she was fined for her social media video where she renounced her work with the Kremlin’s propaganda campaign.

Ovsyannikova told Amanpour she’s not feeling scared at the moment, but “I realize that my life has changed irrevocably,” and she hoped that she won’t face criminal charges. Amanpour pointed out that with Russia’s new laws, protesting the war and the Kremlin’s narrative can result in a 15 year jail sentence.