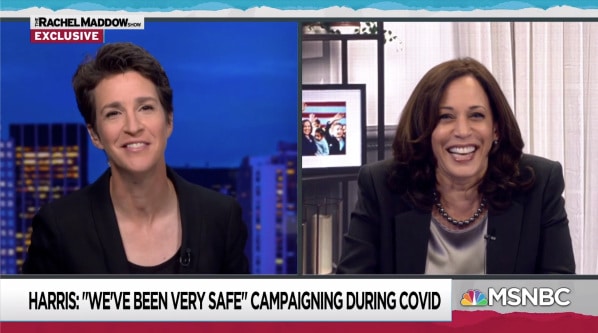 After discussing Trump’s response to COVID-19, Maddow posed the following question to Harris: “Are you as mad as everybody else is that NBC is doing a town hall with President Trump tomorrow instead of the debate, at the same time that Vice President Biden’s going to be on ABC?”

In response, Harris broke out into nervous laughter, saying, “I’m not touching that.”

Maddow then reframed her question, asking Harris: “Should the networks refuse to give the president other opportunities for airtime if he’s the one who refuses the chance to debate?”

Harris replied politely with, “I’m not going to tell the networks what to do, but I can tell you that I know who I’ll be watching, so there you go.”

Though Harris avoided giving a straight answer, both questions made it clear that Maddow is none too pleased with NBC’s decision to air a town hall for Trump, which was announced on Tuesday. MSNBC declined to comment on the matter.

The turn to a town hall format for both candidates, as opposed to a second presidential debate, occurred on Oct. 9 after Trump’s camp declined the option to have a virtual debate following Trump’s positive COVID-19 diagnosis.

This means that the debate scheduled for Oct. 22 in Nashville, Tenn. will likely be the second and last debate between the two candidates before the Nov. 3 election.