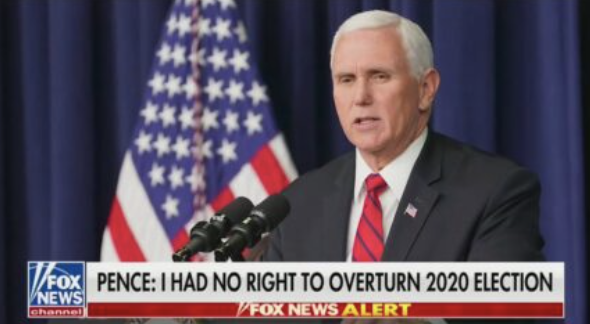 Former Vice President Mike Pence disputed that he had the ability to overturn the results of the 2020 election in a speech at the Federalist Society’s annual conference.

He then delivered comments that were viewed as a strong repudiation of former President Donald Trump.

Trump has repeatedly contended that Pence could have chosen to recognize so-called “alternate electors” following the tense and divisive 2020 election. Pence refused to do so, and after the Jan. 6 Capitol riot, he presided over the counting of Electoral College votes certifying Joe Biden as the winner.

The former vice president drew a strong condemnation from Trump, who has attacked him well into this year for not interrupting the certification of those results.

While addressing the Federalist Society in Orlando on Friday afternoon, Pence remembered Jan. 6 and rebuffed Trump.

Pence said, “As Constitutional conservatives, the American people must know we will always keep our oath to the institution, even when it would be politically expedient to do otherwise.”

“The American people must know, as the Bible says, that we’ll keep our oath, even when it hurts. Jan. 6 was a dark day in the history of the United States Capitol,” Pence addd. “Lives were lost. And many were injured.”

The former vice president was met with a round of applause.

He then noted that “elections are conducted at the state level.”