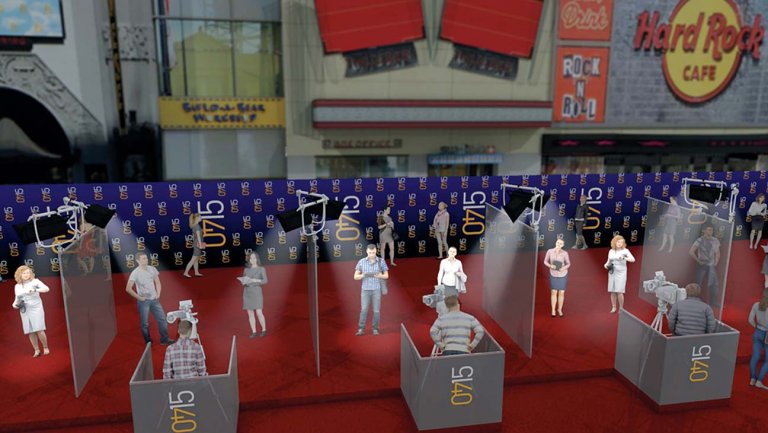 Under Los Angeles County’s Safer-at-Home directives aimed at curbing the spread of the novel coronavirus, red carpet events have been shut down since mid-March. The ban has been a huge blow to the events industry, and insiders have floated several proposals to get Hollywood’s once-booming red carpets back on track, everything from interview pods and plastic shields separating media from stars, to mandatory face masks and the elimination of entourages.

1540 Prods., a top firm that designs, executes and produces 350 events a year (recent efforts include Game of Thrones‘ final season premiere in New York, Nickelodeon Kids’ Choice Awards afterparty, and the ESPYs post-party) shared renderings with The Hollywood Reporter, one example seen above, that show how drastically different the landscape could look post-lockdown.

“We’ve been meeting with city officials to redesign the experience in a way that works while accommodating social distancing to make talent more comfortable, says Craig Waldman, president and chief creative officer of 1540 Prods. “It limits the number of folks that are actually walking the red carpet and gives press a better opportunity to produce what they need to produce.”

Waldman says entourages will be eliminated while medical staff could be increased to provide temperature checks should those become ubiquitous at large events. The upshot: more space, fewer guests, healthier environments. The question that remains is: when?

California Gov. Gavin Newsom announced this week that the state would be relaxing some mandates and moving into phase two of a four-phase plan for reopening the state. Beginning Friday, businesses that fall into a “low risk” category will be allowed to open doors, and that includes bookstores, florists, sporting goods and clothing stores. Phase three will include higher-risk workplaces like movie theaters, gyms, hair salons, nail salons, in-person religious services and sports without live audiences. The final and fourth phase will see the reopening of concert venues, conventions, sports stadiums and larger entertainment venues, which could take months.

Every sector of the entertainment industry is grappling with how to return to work and what that will look like, including domestic and international producers, casting directors for live theater, writers, and major studios like The Walt Disney Co., a global conglomerate that has many divisions and forms of re-entry to consider. Red carpet events represent a meeting space of sorts where professionals from all corners of Hollywood converge. Everyone interviewed says health and safety should remain a priority, even if many are itching to get back to business.

One of Hollywood’s leading event reps said the toughest part is not knowing. “It’s day by day,” said Andy Gelb, a partner at Slate PR who oversees many of the industry’s top events. “The initial shock has worn off and now people are gearing up. It’s a difficult time, but it’s a creative town and everyone is relying on those skills to come up with different scenarios. It will happen, eventually. Hopefully sooner rather than later.”

Many who work on large-scale events say they’ll be ready when the green light appears.

“We know our industry will be last to come back,” says Waldman, who with executive vp Elizabeth Tramontozzi, has kept 37 staffers working while putting a temporary hold on 1540’s carpentry shop since there are no build-out orders currently. “We’ve been doing this 40 years so we know that it’s now about reinventing who we are. We have to weather this storm and come back with ideas and new avenues for [Hollywood] to be able to put their product out.”