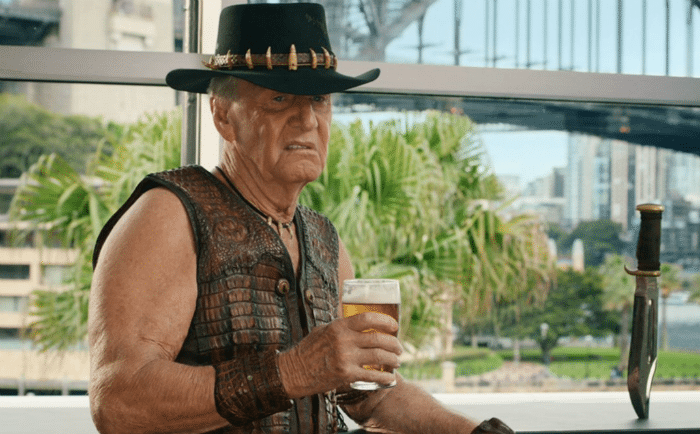 Paul Hogan, star of the hit Crocodile Dundee franchise, is heading back to the big screen in feature comedy The Very Excellent Mr Dundee!

Back in January, the world got punked by an entire country when news started trickling out about a Crocodile Dundee reboot starring Danny McBride. It turned out the whole thing — epic movie trailer and all — was just a teaser for an Australian tourism ad that aired during the Super Bowl. This time, though, it seems Dundee is indeed back, as original star Paul Hogan has announced a new film called The Very Excellent Mr. Dundee.

While the producers are being tight lipped about the supporting cast, Australian actor Hogan said “to watch this space as I’ve been honored to have many of my friends and colleagues, whose work I adore, agree to join us for this hilarious new adventure.”

The film will be directed by Dean Murphy (Charlie & Boots) who is producing alongside Nigel Odell. Executive Producers are Kathy Morgan from LA based KMI who is handling international sales, Christopher Figg and Robert Whitehouse from London’s Piccadilly Pictures, Sherman Ng from Singapore’s Salt Media and Andrew Mackie and Richard Payten from Transmission Films. Fulcrum Media Finance and several equity partners complete the financing.

As Variety reports, Hogan will play himself in the movie (though we bet he puts on the iconic leather hat at least once). The story will see him on the brink of Knighthood, being recognized for his outstanding contributions to comedy. In the six week run up to the knighting, however, he’ll find his reputation dragged through the mud. Dean Murphy, who directed Hogan in 2009’s Charlie & Boots and 2004’s Strange Bedfellows, will helm the production and produce alongside Nigel Odel.

There’s no word yet on additional casting, though Hogan promised in a statement that “many of my friends and colleagues, whose work I adore, agree to join us for this hilarious new adventure.” Production is slated to begin next month with shooting in Australia, Los Angeles, and Vancouver.

John Cena, Jackie Chan to Star in Action-Thriller From ‘Need for Speed’ Director