Kanye West claimed his eighth consecutive Number One album as the rapper’s Ye opened atop the Billboard 200.

Ye sold 205,000 total copies in its first week of release, although the bulk of that haul was thanks to 120,000 streaming equivalent albums (SEAs). 85,000 copies of the seven-song LP were from traditional sales; it’s unclear whether the physical copies sold exclusively on West’s website were part of that total.

West joins Eminem as the only artists to debut at Number One with eight straight albums, Billboard reports. For West, his streak began in 2005 with his second album Late Registration – his first LP The College Dropout peaked at Number Two in 2004 – and continued with Graduation, 808s & Heartbreak, My Beautiful Dark Twisted Fantasy, Watch the Throne with Jay-Z, Yeezus, The Life of Pablo and now Ye.

Depending on how the Billboard 200 views West and Kid Cudi’s Kids See Ghosts, the rapper could make it a record-breaking nine straight Number One albums next week. (Comparatively, that collaborative album‘s failure to finish first could potentially end West’s streak if, like Watch the Throne, Kids See Ghosts counts toward West’s chart-topping tally.) 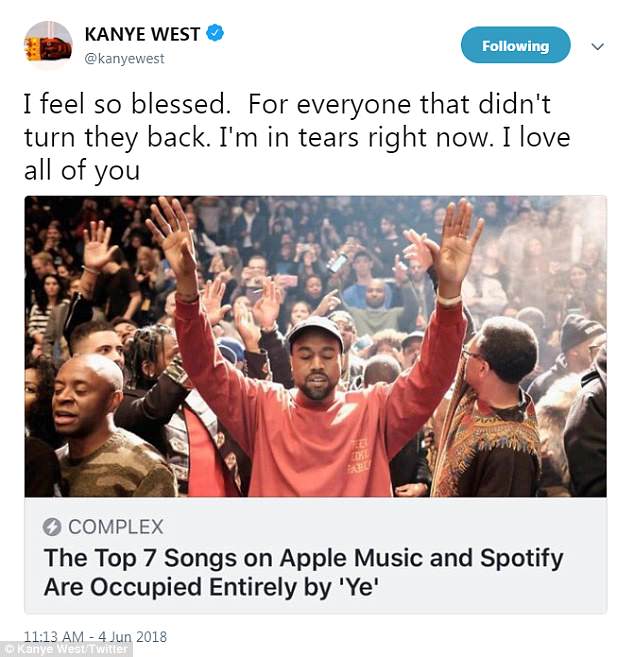 Giving thanks: Last Monday, Kanye West was ‘in tears’ as he took to Twitter to thank ‘everyone that didn’t turn they back.

10 Actors Who Look Exactly Like The Characters They Played