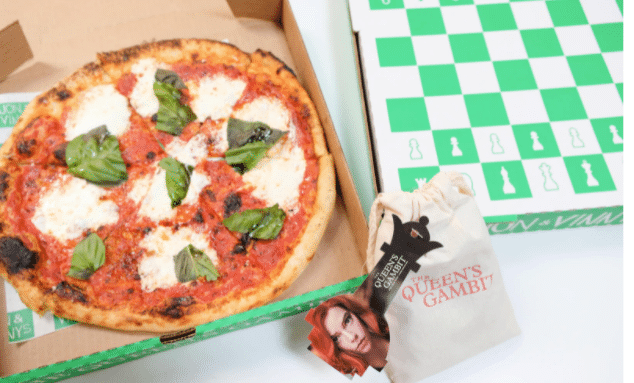 Jon & Vinny’s is offering pizza with extra chess this weekend. As part of Netflix’s For Your Consideration campaign for its limited series “The Queen’s Gambit,” the streamer has partnered with the popular local pizza chain to hand out custom pizza boxes promoting the show’s awards hopes.

As part of the campaign, the Jon & Vinny’s green and white cardboard pizza boxes have been redesigned into chess boards. And each pizza order will include a 32-piece black and white plastic chess set in a branded “The Queen’s Gambit” bag. Those bags also include a hang tag featuring star Anya Taylor-Joy on the front with a QR code on the back linking to “The Queen’s Gambit” FYC site.

Every Jon & Vinny’s pizza order across its Fairfax and Brentwood locations in Los Angeles from Thursday, June 10, to Sunday, June 13, will receive the boxes and chess set.

Along with the pizza campaign, Netflix also launched a digital spot of a Chess Monthly magazine that morphs into Russian.