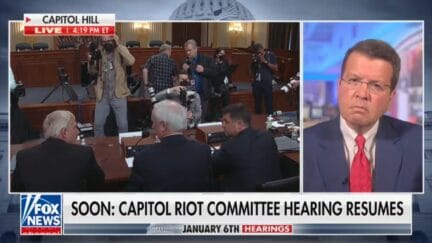 During a recess of Thursday’s Jan. 6 committee hearing, Fox News anchor Bret Baier stated the country wasn’t as close to losing its democracy as members would have us believe. Fellow anchor Neil Cavuto responded by saying all it would have taken was for one person to cave.

The committee heard testimony from former White House lawyers and officials in the Department of Justice, where an obscure environmental lawyer named Jeffrey Clark told then-lame duck President Donald Trump in 2020 he had a plan to overturn the election that Trump had lost. Then-Attorney General Jeffrey Rosen refused to go along with it and Trump reportedly considered replacing him with Clark.

Reacting to this testimony, as well as testimony from state officials this week about the pressure campaigns they faced from Trump to change the election results in their respective states, Baier said the republic didn’t appear to be in imminent danger:

The premise here from the chairman, Bennie Thompson and Liz Cheney is that we were on the brink of losing our democracy. If anything, I think this testimony shows – not only the Arizona House speaker – all of the state officials, these officials in DOJ who, again were working for President Trump, stood up, saying we have an oath to the Constitution.

If anything, I think it proves that we were not close to that. And even though the president wanted to keep on trying to overturn the election, that there were patriots along the way who said we can’t do this. So I’m not sure that that premise sells with all the witnesses that they’re putting forward.

Cavuto replied, “But if one of them had buckled, it would be a very different, different moment.”