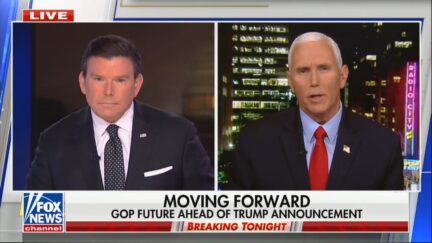 “Your former boss, by all accounts, is going to get back into the presidential field. He is going to announce that he wants to seek the Republican nomination for a third time. What do you make of that tonight?” anchor Bret Baier asked Pence.

“Well, it’s a free country, Bret. The president’s entitled to make whatever announcement that he wants to make tonight,” Pence replied, adding:

But as I wrote in my book that was just released today, I’m incredibly proud of the record of the Trump-Pence administration. We rebuilt our military, revived our economy, secured our border, unleashed American energy, and saw conservatives appointed to our courts at every level, including three to the Supreme Court that gave America a new beginning on the right to life this year.

“But all of that being said, as I’ve traveled around the country over the last two years, what I hear again and again, Bret, is that people want to see us return to the policies of the Trump administration,” Pence continued before getting to criticism of Trump.

“But I hear people saying that they would like us to move forward with leadership that will unite our country around our highest ideals and reflect the kind of respect and civility that the American people demonstrate to each other every day,” Pence added alluding to Trump’s penchant for name-calling and lack of civility.