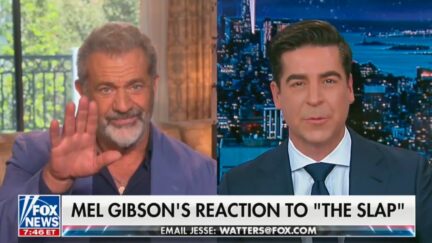 A handler for Mel Gibson ended an interview the actor was doing with Jesse Watters after the host asked about The Slap at Sunday’s Academy Awards.

Specifically, he asked Gibson if he’d be treated the same way as Will Smith was after he hit Chris Rock for making a bald joke about his wife Jada Pinkett Smith.

Will Smith was allowed to stay for the rest of the ceremony and has not been arrested. On Friday, he resigned from the Academy of Motion Picture Arts and Sciences.

Gibson appeared on Jesse Watters Primetime to discuss his upcoming move with, Father Stu, in which he costars with Mark Wahlberg.

“I was wondering if you had been the one that jumped up out of his seat and slapped Chris Rock,” Watters said toward the end of the interview as Gibson laughed nervously and waved his hand, “if you would’ve been treated the same way, Mel.”

Rather get an answer, a handler for Gibson chimed in.

“Have you ever thought about that?” Watters pressed.

“Um thank you, Jessie,” said the disembodied voice. “That is our time.”

“Well, Mel, thank you very much for joining Jesse Watters Primetime. We really appreciate it.”

Watters promoted the movie and Gibson replied, “Thank you.”

Later in the show, Watters read a text from a viewer asking, “Do you think Mel Gibson had any idea who you are?”