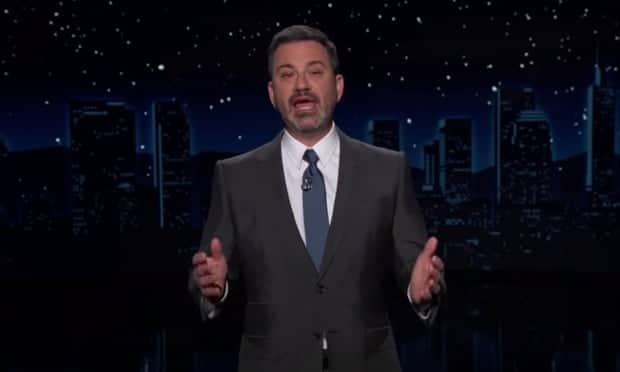 On Jimmy Kimmel Live, the host called NBC’s decision to schedule a Trump town hall directly against Biden on ABC “a very sneaky move” and claimed that: “NBC sucks.”

Kimmel played footage of the last time Trump was being interviewed by Savannah Guthrie before he became president, when he claimed that he would become presidential if he won the election. “OK, when is that? Maybe we could get a little bit of that going before you leave?” Kimmel joked.

He said that Trump has been “trying to rally his way back in the race” after polls show him losing to Biden. This week he claimed that he was the second most famous person in the world after Jesus Christ. “Jesus healed the sick, he didn’t infect them with the coronavirus,” Kimmel said.

Trump also complained that hurricane coverage meant that his Nobel peace prize nomination wasn’t covered on the news enough. “No one in my lifetime has done more to separate us, to drive us apart than Donald Trump and yet he genuinely believes he deserved to win the Nobel prize for peace,” Kimmel said.

The host went on to say that the attorney general and Trump henchman, Bill Barr, had “shed himself of all credibility in service of this president” yet this week Trump criticised him for not arresting the people he wants arrested. Kimmel warned him to be careful, saying he “could be talking about his future cellmate”.

This year’s October surprise is that “there was no surprise at all” but Trump has been heavily promoting his re-election. “Trump is so desperate for attention, he’s doing every show, he’s doing shows I’ve never heard of,” he said.

This week he said that Biden shouldn’t be president because we need a president who is sharp. “Finally something we agree on,” Kimmel said.