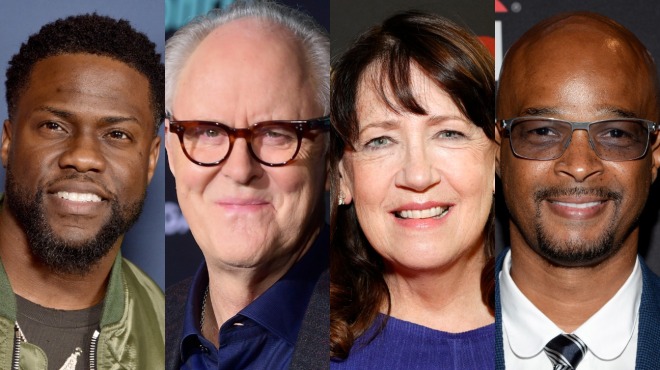 Norman Lear is heading back to the Sony lot.

The television veteran and Jimmy Kimmel will revive their Emmy-winning Live In Front of a Studio Audience series on Dec. 7 with live episodic reenactments of the classic sitcom Diff’rent Strokes and its spinoff The Facts of Life.

As Kimmel first revealed onhollywoodreporter.com/t/norman-lear his late night show Thursday evening, the former will be led by Kevin Hart in the role of Arnold (once played by Gary Coleman) and John Lithgow as Mr. Drummond.

The one night only ABC event will also feature Ann Dowd and Damon Wayans, who are set to play Mrs. Garrett and Willis, respectively. The collection of A-listers will be joined behind the camera by more bold-face names in returning producers Kerry Washington, Will Ferrell, Justin Theroux, Jim Burrows and Brent Miller. (The Facts of Life cast is still coming together.)

“Other than with my family, there’s no place I’d rather be in my 100th year than on a soundstage at Sony with these glorious actors reliving what our company had produced all those years ago and sharing it with the millions of viewers who could use a little laughter,” says Lear, who’s still a towering presence in the television industry.

The franchise, which was originally conceptualized by Kimmel, got its start in the spring of 2019, when still more stars — including Woody Harrelson, Viola Davis, Jamie Foxx, Kevin Bacon and Martin Short — recreated memorable episodes of Lear’s All in the Family and The Jeffersons. Later that year, Lear and Kimmel, in partnership with ABC and Sony Pictures Television, rolled out a second installment featuring another episode of All in the Family along with a recreation of Good Times.