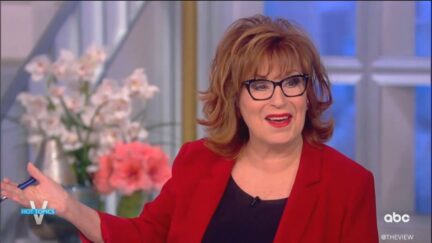 The View co-host Joy Behar mocked Rep. Marjorie Taylor Greene on Friday over her response to comedian Jimmy Kimmel calling for Greene to be slapped just like comedian Chris Rock was at the Oscars by actor Will Smith.

During his show on Tuesday, Kimmel shared a tweet Greene posted on April 4 calling out Sens. Mitt Romney (R-UT), Susan Collins (R-ME), and Lisa Murkowski (R-AK), all of whom would go on to vote in favor of Ketanji Brown Jackson’s confirmation to the Supreme Court, which occurred on Thursday, as “pro-pedophile.”

“Wow, where is Will Smith when you really need him?” said Kimmel.

In response, Greene tweeted, “@ABC, this threat of violence against me by @jimmykimmel has been filed with the @CapitolPolice.”

“Touchy, touchy, touchy. It’s interesting,” said Behar. “She is a joke, and yet she can’t take a joke.”