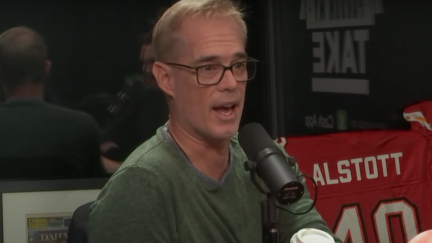 Joe Buck is used to performing on the big stage, having called 23 World Series and six Super Bowls for Fox.

Not surprisingly, Buck doesn’t believe broadcasting is a career fit for bashful personalities, but it has more to do with being a shameless facilitator than having millions of people watching you on national TV.

“If there’s stage fright in your life, don’t even apply,” Buck said on the SmartLess podcast hosted by Will Arnett, Jason Bateman, and Sean Hayes. “Because you have a minute and a half to go to the bathroom and there’s running involved.”

Sometimes, 90 seconds just isn’t enough to get back from the bathroom, but that won’t stop a consummated pro like Buck from doing his job.

“I have peed in a bottle while calling an NFL touchdown,” the famed broadcaster said. “I was peeing in a trash can and they handed me like a little water bottle.”

“We came back from a break and I was peeing and the action started,” Buck continued. “And I called a touchdown while urine was coming out of me,” he explained, as only a play-by-play voice could so eloquently describe.

Buck said the incident occurred during a Packers-Falcons game, back when Green Bay used to play some of their home games at Milwaukee County Stadium. The last Packers game played in Milwaukee was Dec. 18, 1994, with Green Bay defeating the Atlanta Falcons 21-17. ’94 also happened to be Buck’s first season calling NFL games for Fox.