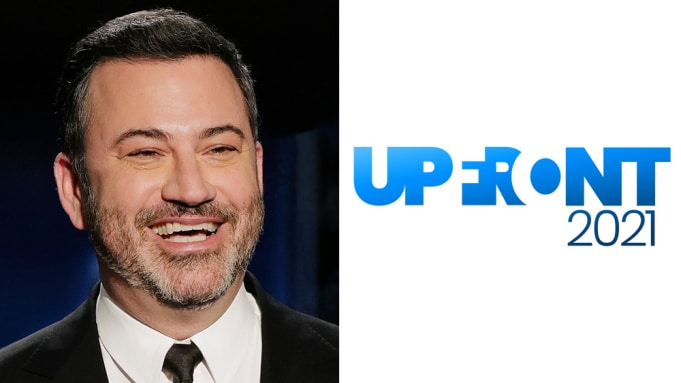 “At this point, let’s call ABC what it really is, Disney-,” quipped Jimmy Kimmel in a scathing roast of all thing small screen at Disney’s Virtual Upfront.

“Isn’t there something to be said for dying with dignity,” the Live! host added. “Somehow when everyone’s stuck in their houses with nothing to do but watch TV for the past 14 month and we still managed to lose ratings,” Kimmel added in a wide slam of the record low Oscars and virtually everything else on the Big 4 over the coronavirus pandemic.

The Mandalorian star was far from the only big name to get scorched Tuesday by Kimmel in his annual roast.

Kardashians matriarch Kris Jenner, the bragging rights and “glossary for bullshit” of Disney executives, NBC’s insistence that the Tokyo Olympics should go on despite Japan’s rising Covid cases, big spending Amazon, and uber-producer Dick Wolf. Near the end, the exiting Bob Iger and his CEO successor Bob Chapek got burned.

“We don’t have Dick,” Kimmel blasted the Chicago everything EP. One thing we can promise is that this company will always be run by a gut named Bob in an open collared shirt,” the comedian asserted at another point, shooting up the House of Mouse food chain.

It wasn’t all jokes today, with the end of an era looming.

“I just want to say, I don’t know if he is ever really leaving, but if he does, and I hope he doesn’t, but if he does on behalf of all of us at Disney, I want to say thank you to Bob Iger for everything you’ve done for me, for us,” Kimmel said as the now executive chairman prepares to leave Disney at the end of the year. “Also, why the fuck was Mulan $30 dollars?”

A tradition at ABC upfronts for nearly 20 years, 2021 is the second year in a row that the late night host has served up his roast remotely for the whole Disney empire. Kimmel filmed the segment last night, I hear. The takedown of ABC and everyone else comes after Disney brass appeared (slightly glitchy) on screens across America early today in a digital press conference pre-empting their own upfront presentation this afternoon.

As always, everybody and their dog took a hit, but none more than ABC itself.

“Things are so desperate, we’ve had to resort to doing the right thing: inclusion,” Kimmel noted. “We want ABC, Disney, FX, Hulu, Freeform, ESPN and Nat Geo to be a safe space where anyone, no matter what their racial or ethnic background, their gender or sexual orientation …we want our platforms to be a place where everyone can bring their stories to die.”

And then Kimmel really brought out the shiv to the delight of the laugh track.

BET Awards to Return in June With a Live, Vaccinated Audience