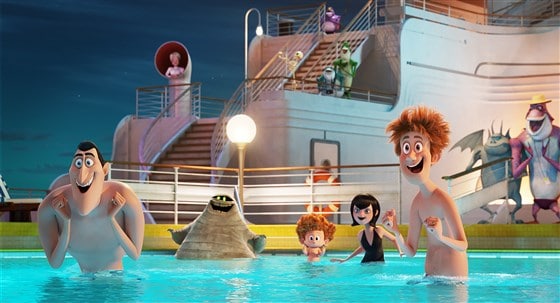 “Hotel Transylvania 3: Summer Vacation” has checked into the No. 1 spot at the box office in its opening weekend and left the Dwayne Johnson action thriller “Skyscraper” in the dust.

Sony Pictures estimated Sunday that the animated family movie earned $44.1 million from North American theaters. As the first in the franchise to open in the summer, it’s just slightly under the previous installment’s $48.5 million debut in September 2015.

The successful series has grossed more than $900 million worldwide to date.

Going into the weekend, experts expected a three-way race to the top among “Hotel Transylvania 3,” “Skyscraper” and “Ant-Man and the Wasp,” but the family film won by a large margin.

“There haven’t been a lot of options for families this summer,” said Paul Dergarabedian, senior media analyst for comScore. “They become instant hits.”

“Skyscraper,” a rare original summer blockbuster, remained earthbound in its first weekend in North America. The Universal Pictures film brought in only $25.5 million domestically. “Skyscraper” cost a reported $125 million to produce, not accounting for marketing costs.

(Universal Pictures is a division of NBC Universal, the parent company of NBC News.)

Johnson has been a consistent presence in movie theaters this year with both “Jumanji: Welcome to the Jungle” and “Rampage” before “Skyscraper.”