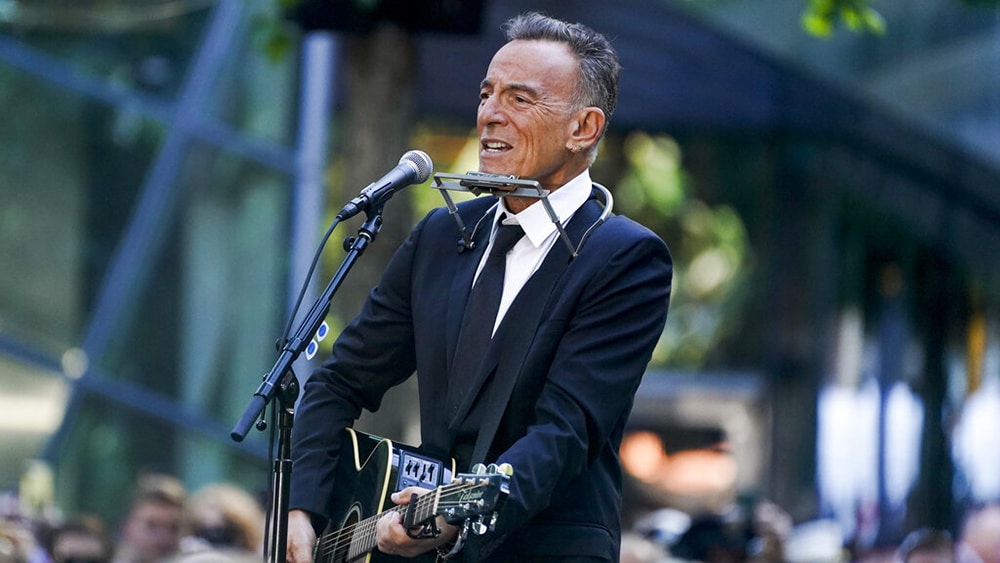 On the 20th anniversary of the Sept. 11 attacks, Bruce Springsteen gave an emotional live performance of “I’ll See You in My Dreams” at the 9/11 memorial in New York City.

Before the performance, Springsteen gave a speech remembering the nearly 3,000 people who died. “May God bless our fallen brothers and sisters, their families, their friends and their loved ones,” he said. After the singer performed, there was a moment of silence at 9:03 a.m. to mark when United Airlines Flight 175 crashed into the south tower of the World Trade Center.

When Springsteen and the E Street Band’s album, “The Rising,” was released in 2002, Springsteen spoke to Nightline to talk about how the Sept. 11 attacks inspired it. “One of the most powerful images of the 11th, that I’d read in the paper, some of the people coming down were talking about emergency workers who were ascending,” Springsteen said. “The idea of those guys going up the stairs, up the stairs ascending, ascending. I mean you could be ascending up a smoky staircase, you could be in the afterlife, moving on.”

Alongside Springsteen, other world leaders and celebrities commemorated the 20th anniversary of the Sept. 11 attacks.

“In the weeks and months following the 9/11 attacks, I was proud to lead an amazing, resilient, united people,” the former president said. “When it comes to uniting America, those days seem distant from our own. Malign force seems at work in our common life, that turns every disagreement into an argument, and every argument into a clash of cultures. So much of our politics has become a naked appeal to anger, fear and resentment. That leaves us worried about our nation and our future together. I come without explanations or solutions. I can only tell you what I’ve seen. On America’s day of trial and grief, I saw millions of people instinctively grab four a neighbor’s hand, and rally to a cause for one another.”

Vice President Kamala Harris also touched on national unity in her speech in Shanksville, saying: “In a time of outright terror, we turned toward each other. In the face of a stranger, we saw a neighbor and a friend.”

Mariah Carey took to Twitter to speak on the anniversary of the terror attacks. “On this anniversary of 9/11, I find myself remembering the shock and anguish we all experienced with painfully deep sadness. Vivid images of the skyline I grew up loving so much, suddenly changed forever,” Carey said.

She later continued the post in a thread, writing: “Still astonished by how many innocent people were lost in an instant, gone forever but never to be forgotten. Thinking of all the families still mourning their loved ones 20 years after that devastating and tragic moment in our history.