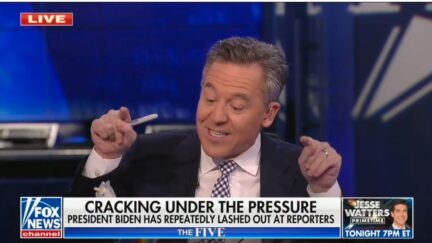 As the media world knows by now, President Joe Biden called Fox News White House Correspondent Peter Doocy “a stupid son of a bitch” on Monday in response to the reporter’s question about inflation.

“Do you think inflation is a political liability in the midterms?” Doocy asked as he was being ushered out of the East Room after a photo op.

“No, it’s a great asset,” Biden said sarcastically, apparently unaware his microphone was still on. “More inflation. What a stupid son of a bitch.”

Biden later called Doocy to “clear the air.” The reporter took it in stride and relayed that the president said, “It’s nothing personal, pal.” Doocy said he also responded by telling Biden he appreciated him reaching out.

Addressing S.O.B.-gate on Tuesday’s The Five, Greg Gutfeld actually sided with the president.