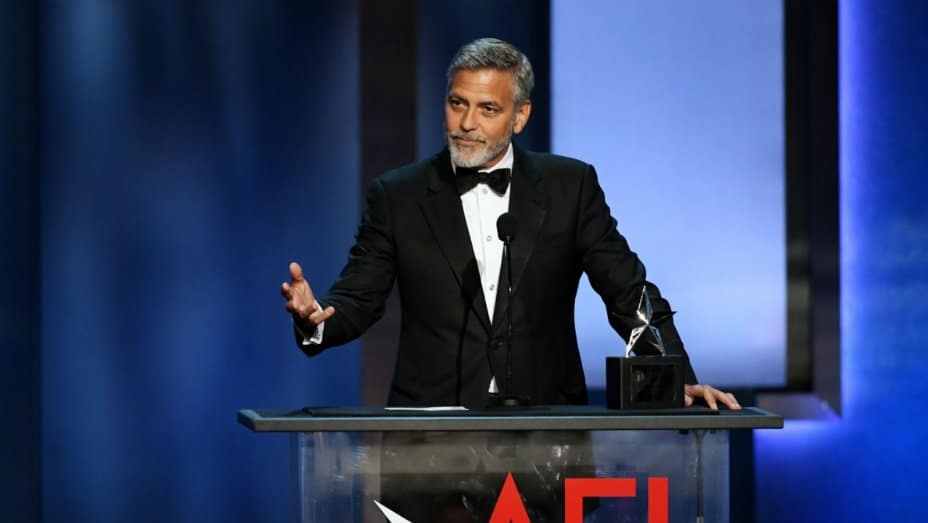 “I love being a part of this industry,” George Clooney said as he accepted the American Film Institute’s Life Achievement Award tonight at a gala dinner at the Dolby Theatre in Hollywood. “I’m very proud of the changes I’m seeing in this industry. They’re much overdue.”

He also thanked his parents, who were present, calling them “two of the most ethical people I know. Their example was always due north.” The honoree, 57, also spoke warmly of his wife Amal, saying, “I thought you couldn’t have it all. I thought if you had a successful career you couldn’t have one great love and then I met Amal.” And he also thanked everyone who took the time to toast (and lightly roast) him throughout the evening.

“Tonight is very special, I will treasure it,” he concluded, signing off by borrowing Edward R. Murrow’s signature line: “Good night and good luck.”

The award was supposed to be presented to him by long-time pal Julia Roberts — with whom he shared the screen in Ocean’s Eleven and Money Monster — but due to a scheduling conflict she couldn’t make it. Shirley MacLaine, who starred in the original Ocean’s 11 and who also received the AFI honor in 2012, stepped in instead, joking, “I’m the one who goes on when the star has a problem.”

Of Clooney, MacLaine saud, “The humanity in you is what has always gotten my attention… Please use your imagination for the future for all of us. … To help us understand our anger and more than anything our thwarted understanding of how to love.”

Earlier in the evening, Clooney was introduced as “a man of the movies and a citizen of the world” by his own father, broadcast journalist Nick Clooney.

Calling the proceedings to order, Howard Stringer, chair of the AFI board of trustees, said the tribute to Clooney was designed “to celebrate his values and character as much as his memorable movies.”

During the course of the evening, Clooney’s modern-day Rat Pack of friends, collaborators and co-stars rose to both praise and tease him. And the AFI shrewdly cut together film clips from Clooney’s movies with other classic Hollywood films so as to underline how he belongs to a tradition of screen legends ranging from Cary Grant to Paul Newman.

Former President Barack Obama was first up, appearing by videotape to lend his support to Clooney, who he said, “Does the whole grey hair thing better than me.” He also testified, “He is a good man, a good friend, a good citizen and an outstanding maker of film.”

Obama was followed by last year’s recipient of the award, Diane Keaton, who testified of Clooney, “I really feel that you are irresistible in every possible way.”

Late-night’s Jimmy Kimmel took the stage to roast the actor a bit, joking, “I’m not here to honor George Clooney’s work in film. To be honest, I’ve never seen any of his movies. Monuments Men was so bad, you had me rooting for Hitler.” He also recounted some of the many pranks Clooney has famously played on his friends, claiming his greatest prank was ”convincing Roseanne [Barr] to open a Twitter account.” Kimmel added, “All these years thinking George is Batman. Truth is he’s the Joker.”