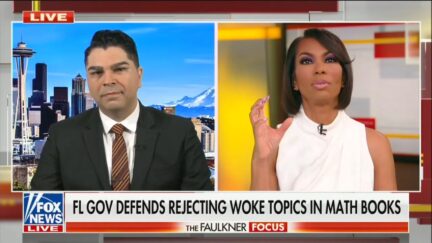 “Florida Democrats are demanding to see examples of the CRT in these textbooks. DeSantis so far has set up a review but otherwise, he is not budging,” Faulkner said before playing a clip from DeSantis’ speech:

You do have things like social and emotional learning and some of the other things more political in there. In our view on something like math first it doesn’t meet the standards but second math is about getting the right answer. And we want kids to learn to think so they get the right answer. We’re going to continue to focus the education on the actual strong academic performance of the student. We don’t want things like math to have some of these other concepts introduced.

“Not that it was anybody’s intention but they need to come up with examples on this,” Faulkner then said.

“And I know the governor says they are reviewing it,” she added.

Florida state Rep. Carlos G Smith slammed DeSantis on Twitter Tuesday, writing: “#DeSantis had three days to provide basic info on the 54 math books he banned from schools for allegedly “indoctrinating” kids with CRT. The best his propaganda machine could do was deflect to a Missouri district that apologized for a homework assignment they didn’t approve.”

Days Seem Numbered for CNN+, but Could Its Shows Live On?