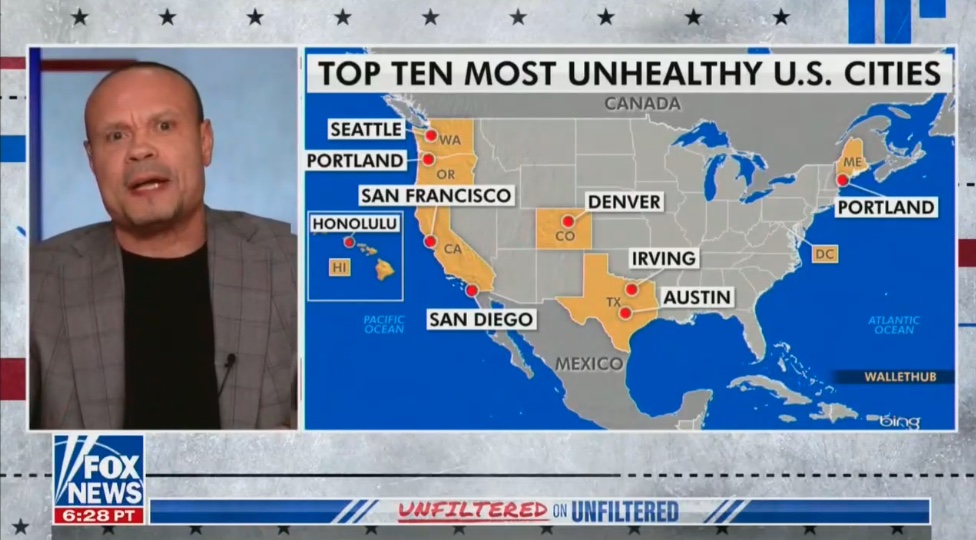 Saturday’s edition of Unfiltered with Dan Bongino on Fox News could have used some filtering with regards to an egregiously inaccurate graphic aired during a monologue on unhealthy cities.

In a segment designed to portray large cities run by liberal politicians as unsafe and unhealthy, Unfiltered showed a map of the U.S. that highlighted the “Top Ten Most Unhealthy U.S. Cities.”

The only problem is, the graphic actually showed the ten healthiest cities – or, nine of them anyway – according to the very source that Fox News cited.

Bongino lamented that many cities haven’t had Republicans at the helm for decades.

“You look at some of the health outcomes in these inner cities the Democrats have run monopolistically for decades, and you stand a pretty darn good chance of dying in one of these inner cities – far more likely, than if you lived in an areas where they gave a damn about people and their healthcare outcomes.”

During the monologue, Fox News aired a graphic claiming that the unhealthiest cities in the U.S. are: San Francisco; Seattle; Portland, OR; San Diego; Honolulu; Washington, D.C.; Austin; Irving, TX; Portland, ME; Denver.

But there’s a problem. According to WalletHub – the source that Unfiltered cited in its graphic – the 10 cities featured in the graphic are actually the “healthiest places to live in the U.S.” That is literally the opposite of “most unhealthy.”

Well, nine of the cities, anyway. Apparently, the Bongino and his production crew took Irvine, CA to mean Irving, TX, which made its way into the hilariously inaccurate graphic.