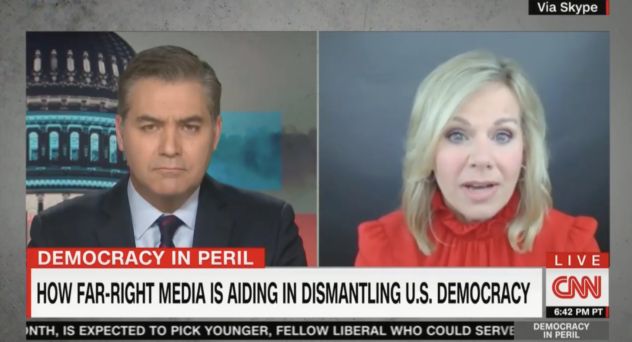 Former Fox News mainstay Gretchen Carlson, who left the network under the cloud of sexual harassment lawsuit in 2016, accused her former TV home of spreading “fake news” on CNN Thursday.

Carlson joined Fox in 2006, and was cohost of Fox & Friends for years before launching The Real Story with Gretchen Carlson in 2013. In 2016, she accused network co-founder and CEO Roger Ailes of sexual harassment and walked away following a settlement with the network.

She appeared on Democracy in Peril with Jim Acosta on to talk about her former employer, the other Carlson at the network, and how she says both played a part in the Jan. 6 assault on the U.S. Capitol.

Acosta aired a clip of Tucker Carlson questioning why the U.S. is supporting Ukraine, a country he has contended Americans have no allegiance with, amid its ongoing tensions with Russia.

After accusing Fox News of allowing former President Donald Trump and others to push “the big lie” on air, Acosta asked Carlson her thoughts on the state of Fox News.