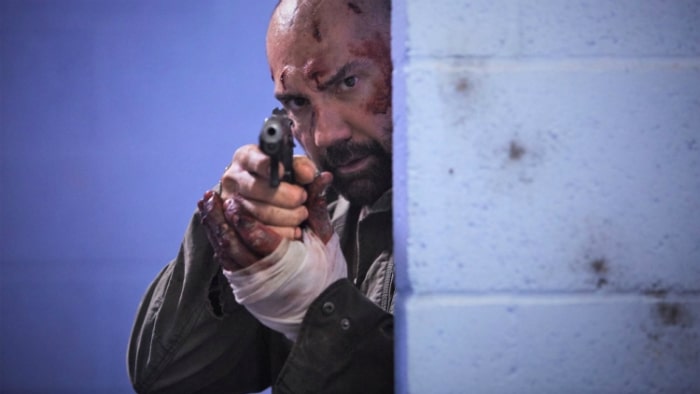 Dave Bautista will star in a family-friendly action-comedy called My Spy, which will be directed by Get Smart and Tommy Boy’s Peter Segal.

Dave Bautista is showing some real-life nerve these days after recently enjoying action-centric roles in Guardians of the Galaxy, Blade Runner 2049, and Spectre. Just today, one senses he helped lead all the cast of the Guardians films in signing an open letter of support for James Gunn—while tweeting on his account “#RehireJamesGunn”—and now he is also upping his action stance on the screen too in a new starring role for STX Entertainment.

As relayed via THR, Bautista is starring in My Spy, a new family friendly action-comedy with Peter Segal signing on to direct. Segal is himself no stranger to action-comedy, having helmed the Steve Carell and Anne Hathaway-starring Get Smart a decade ago. His credits also include 50 First Dates, Anger Management, and Tommy Boy. Further the new comedy will give Bautista a chance to enter the “Kindergarten Cop” stage of his career.

The logline reads, “My Spy will tell the story of a hardened CIA operative (Bautista) who finds himself at the mercy of a precocious nine-year-old girl, having been sent undercover to surveil her family.”

Yeah, it’s not a new film concept. We’ve seen this kind of story several times before, but this time Bautista is the leading man.

The movie was written by Jon and Erich Hoeber, who previously wrote the Redaction franchise, Battleship, and the upcoming Jason Statham film The Meg.

There’s a good team of people behind this movie, so even though it’s not a new concept, it still could turn out to be a decent movie.