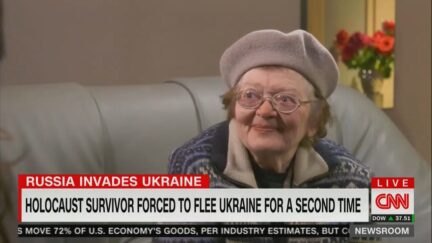 CNN profiled a Holocaust survivor who was forced to flee Ukraine for the second time amid Russia’s invasion.

A report during CNN Newsroom by Salma Abdelaziz featured Margaryta Zatuchna, who said she was born in 1940.

“In 1941, her family fled their home in Kharkiv, where Nazis murdered an estimated 16,000 Jews [during the Holocaust]. She later returned, grew up and grew old in peacetime,” narrated Abdelaziz. “That is, until Russian troops invaded. Bombing and besieging Kharkiv.”

“There was no water or power. We couldn’t buy food. It was impossible to live,” said Zatuchna, 82, as translated by Abdelaziz. “There was explosion after explosion. A real war.”

“Not even a monument that honors the city’s Holocaust victims escaped Moscow’s so-called de-Nazification campaign,” said Abdelaziz. “But Margaryta stayed to care for her sick husband as long as she could.”

According to a translation by Abdelaziz, Zatuchna recalled that “an explosion blew out all our windows” and that her husband “grew weaker and weaker.” Her husband passed away almost a month after the invasion began. “His body still lies in a morgue,” said Abdelaziz.

Zatuchna was taken by vehicle from Kharkiv to Lviv, in Western Ukraine in what was a two-day journey, and then by ambulance to Krakow, Poland.

Abdelaziz met with Zatuchna at the Polish border.