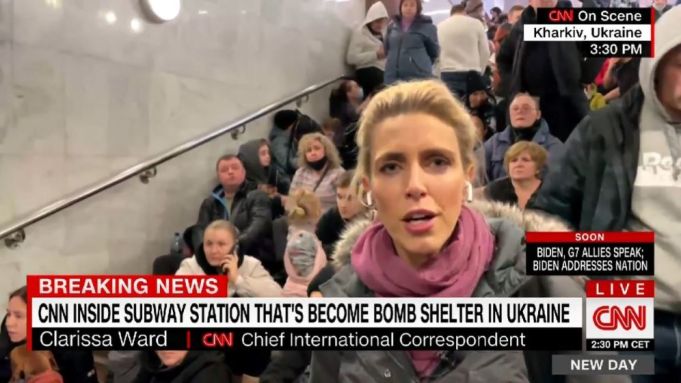 CNN has switched into full-battle mode to cover the fast-moving implications of the fighting in Ukraine, the first large-scale invasive war in Europe in more than 70 years.

After months of preparation, the invasion by Russian forces began before dawn, following a TV address from Russian president Vladimir Putin in Moscow. It was followed just minutes later by explosions in several towns across Ukraine, including the capital Kyiv (aka Kiev).

The WarnerMedia-owned CNN had similarly readied its own troops at points inside Ukraine and across the border in Russia, from where the invading forces sprang.

“We’ve had a ‘dynamic live experience,’ what we would previously have called a live blog, operating for a few days already, and will of course keep up the digital news operations. But the live TV coverage is now clearly the priority,” a CNN spokesman told Variety. “CNN and CNN International will be effectively combined at times and taking the same pictures.”

Within Ukraine itself, the reporting teams are fronted by Matthew Chance in Kyiv, Clarissa Ward and Sam Kiley in Kharkiv, Michael Holmes and Jim Sciutto in Lviv, and Nick Paton Walsh in Odessa. Across the border in Russia’s Belgorod region is Fred Pleitgen.

With their camera crews, these reporters have been monitoring the movement of military forces on the ground and bear witness to bombings and explosions.

Matthew Chance has dug in near the Antonov military airbase near Kyiv that is reportedly under attack. “Matthew and his team must be very nimble,” said the spokesman. “We need all our teams to operate safely, but keep close by.”

Ward is spending much of her first day of war in a subway in Kharkiv where some of the local population is holed up. It “looks like the Blitz,” the spokesman said, a reference to the WWII aerial bombing of London and the Londoners sheltering in underground stations.

The humanitarian angle is expected to increase in importance as the conflict continues. CNN has a reporting team in Poland awaiting Ukrainians crossing the border to safety. Similarly, news doyenne Christiane Amanpour is monitoring international reaction and will be playing into coverage from Thursday.

The scale of its ground forces allows CNN to make its own judgement calls on current events and to broadcast proprietary feeds, but these may be supplemented by selected third-party news and footage. “Information is not always reliable,” the network rep said. “The fog of war is clearly with us. So, we have an additional team in Atlanta which is vetting images and text. They treat all of it with caution and suspicion.”