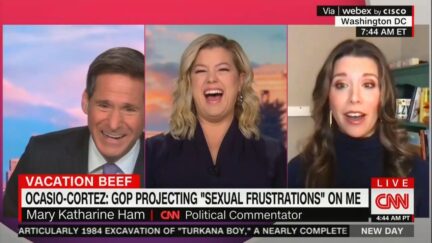 Ocasio-Cortez recently took to Twitter to hit back at Republicans criticizing her vacation to Florida, claiming they are “mad they can’t date me.”

“If Republicans are mad they can’t date me they can just say that instead of projecting their sexual frustrations onto my boyfriend’s feet,” she wrote. “Ya creepy weirdos.”

Ham reacted to the representative’s response while sitting down with Brianna Keilar and John Berman Monday, mocking her for calling attention to the “plight of the super hot.”

“Well, first of all, I woke up like this,” Ham quipped. “So I think I have an authority on people being sexually frustrated by my mere existence. It happens all the time.”

Ham went on to joke that she was excited to discuss this “important issue” with the co-anchors, adding, “the plight of the super hot in America has long been ignored, and AOC has started a national conversation about this.”