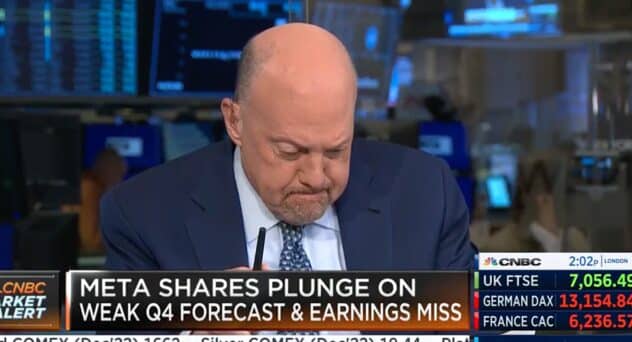 CNBC’s Jim Cramer was overcome with emotion as he apologized for being wrong about Facebook’s parent company, Meta.

Meta stock over the past month has plunged as it was $138.61 on Oct. 3, the first day of trading this month, to just over $98 on Thursday. The company’s revenue decreased in the third quarter.

In June, Cramer encouraged viewers to buy Meta stock. However, during Thursday’s Squawk on the Street, Cramer broke down.

“I made a mistake here. I was wrong. I trusted this management team. That was ill-advised. The hubris here is extraordinary and I apologize,” he said.

Cramer stated that his purpose for being on TV is to “try to help people every day.”

“And I failed to help people. And I own that. And was I too close to the company? I did not think the company would be as ill-advised as to spend through what they had without any discipline whatsoever.”

When told he wasn’t the only person to think Meta’s stock would perform well, Cramer replied, “I don’t really care about that. I fucked up.” (The f-bomb was censored.)

Meta founder and CEO Mark Zuckerberg, who has lost tens of billions of dollars as Meta stock has tumbled, sugarcoated the numbers.