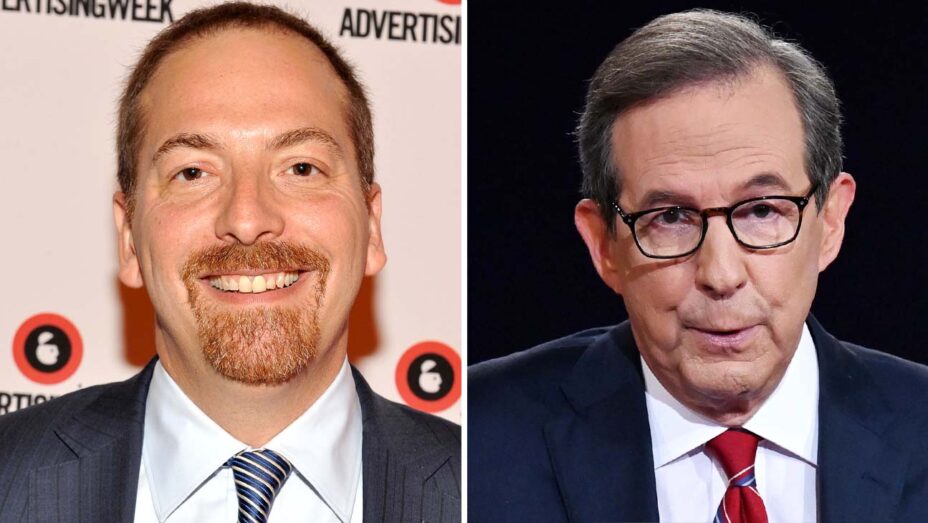 They may have competing Sunday morning talk shows, but Chuck Todd, the host of NBC’s Meet the Press, says people should not blame Chris Wallace, the host of Fox News’ Fox News Sunday, for Tuesday night’s “trainwreck” of a first presidential debate between President Donald Trump and former vice president Joe Biden.

Todd, speaking with The Hollywood Reporter for a piece that will run tomorrow about the upcoming Meet the Press Film Festival at AFI (a sidebar of AFI Fest), admitted, “in fairness to Chris,” that he isn’t sure what he would have done differently. “Honestly, I don’t know,” he said. “I’ve been in a moderator chair — not that one [for a general election presidential debate], but I’ve done primary debates — and it’s live television. It ain’t easy. I’ve moderated quite a few debates, and I’ve not really run into a situation where somebody was actively, constantly not following the rules. One or two chastising ‘Hey, you’re over the limit’ usually works.”

“Now,” he continued, “in some ways, none of us should be surprised that he [Trump] hijacked it. It’s not as if there isn’t a history that he might do that. But the point is, how do you prepare for a hijacking? In fairness. Look, it was a trainwreck. But at the end of the day, if one candidate decides they’re not going to play by the rules, there’s not much you can do about it unless you want to just cancel the thing.”

“The microphone cutoff idea, in theory, I buy into,” Todd said in reference to widespread calls to effectively mute a candidate if he or she exceeds agreed-upon time limits. “I just don’t know, in practice, whether it works the way you think it’s going to work. I think it’s going to be harder if you try it at a town hall debate [the format of the next presidential debate, set for Oct. 15], in particular, because there’s always a hot mic walking around.”

He also emphasized, “I’ll tell you this: I don’t think it’s fair to the moderator to make them in charge of when to open up mics. If you’re gonna do that, then have a separate person whose job is, ‘Alright, I turn the mic on after the question is asked and I turn the mic off after their time is up.’ If you did something like that and it was across the board, maybe with this individual candidate [Trump] you have to do it that way. But it does seem silly that we have to come up with rules based on one person who has an inability to follow the rules.”

Asked what the late Tim Russert, Todd’s mentor and Meet the Press predecessor who moderated several (presidential primary) debates, would have thought of the situation, Todd replied, “Honestly, I think the same thing. I can’t imagine he would have had any different view than most of us did, which was like, ‘What the hell was that? This is not good for the country.'”

Todd seemed to feel that one upside of the debate was that everyday Americans got their best sense yet of why the media members who Trump dismisses as “fake news” have found the president’s behavior over the past four years so atypical and worthy of coverage. “A lot of folks think we in Washington that have covered the Trump era for the last four years always have our hair on fire, and I understand that feeling because we’re here living the Trump era second to second in ways that others around the country don’t,” he explained. “But I do think what you saw on the debate night is the rest of the country got an understanding of why Washington’s hair is on fire.”

Todd is looking forward to Nov. 3, Election Day, and to voting — something that some other journalists, including the late Jim Lehrer and, just this week, Bob Woodward, have said they don’t do in order to remain objective in their coverage. “I’ve never understood the idea that somehow casting a vote will make you biased, especially since I still consider my vote a secret ballot,” Todd explained. “Frankly, I’ve always thought, ‘My gosh, I’m pretty lucky — I’m as well-informed about my choices as people can be — and I’m going to use that information correctly.’ So I’ve never understood that mindset. I respect it. I get the premise. I just think the rationale for it doesn’t make sense. What you’re saying is you can’t separate your professionalism from your citizenship, and I’d like to think I can.”