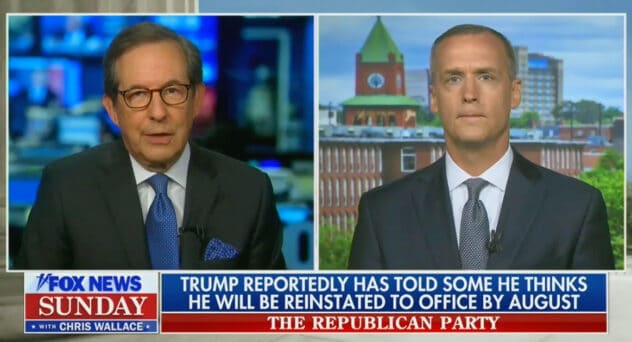 Former President Donald Trump continued pushing the big lie about the 2020 election on Saturday, and this past week there’s been reporting that he has been talking to people about this ludicrous idea he could be reinstated (which is not how this works).

Chris Wallace asked Trump ally and former campaign manager Corey Lewandowski about this, and Lewandowski said in his dozens of talks with Trump in the past few months he has “never” heard this come up.

He went on to talk about “election integrity matters that we need to deal with,” but when he made a comment knocking “the response from the media,” Wallace pushed back.

“You keep blaming this on the media,” Wallace said. “The fact of the matter is this went to more than 60 different court cases and you were beaten in every one. The Supreme Court refused to even hear the Trump challenges, so please don’t blame this on the media. You had your day in court and you lost.”

“What I’m saying that the media’s obligation and responsibility should be is making sure we have a fair and honest account of what the election results were,” Lewandowski said.