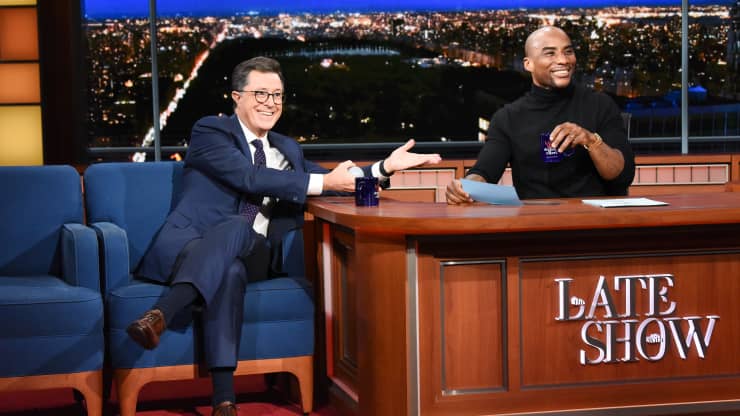 The show brings Colbert back to Comedy Central for the first since “The Colbert Report,” a satirical take on personality driven political shows, ended its 11-season run in 2014.

This week, Colbert teased a return to the network, also owned by CBS parent company ViacomCBS.

“The Late Show with Stephen Colbert” runs weeknights on CBS.

Charlamagne and Colbert, both from South Carolina, said they bonded over their shared background. Colbert’s brother was also a teacher at Charlamagne’s middle school.

“My South Carolina brethren Stephen Colbert is the ultimate co-sign in the late night space and he wouldn’t co-sign no bull—-!” Charlamagne said. “We are going to win an Emmy next year for best lighting direction. I can feel it!!!”

“For too long, the town of Moncks Corner, South Carolina, has been underrepresented in late night,” Colbert said, referring to where Charlamagne grew up. “I look forward to all the ways in which the fearless, peerless Charlamagne is going to change the game.”

According to Wednesday’s release from MTV networks, the weekly 30-minute program will showcase Charlamagne’s “culturally fluent take on social issues in a variety of deep dives, sketches, and social experiments that deftly unpacks the most pressing topics permeating politics and culture. Redemptively comedic, refreshingly unfiltered, and unapologetically Black, nothing is off limits.”

“This is one of those moments where I can show you better than I can tell you.” Charlamagne said.

Charlamagne has appeared on Colbert’s “Late Show” seven times since 2016, and the two developed a friendship over the years that’s culminated in their first business venture. “Tha God’s Honest Truth” will be executive produced by Aaron McGruder, creator of “The Boondocks,” a comic strip and show on Cartoon Network, which takes a satirical look at politics, pop culture, and socioeconomic status of the Black community.

“Tha God’s Honest Truth” is the latest deal in a growing media empire for Charlamagne.