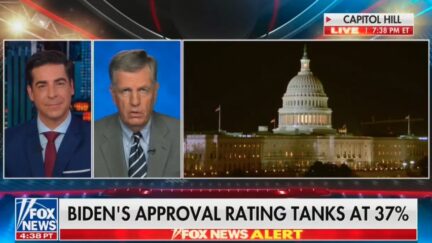 Brit Hume joined Jesse Watters Primetime ahead of Tuesday’s State of the Union speech on Tuesday to offer his thoughts, though at point Jesse Watters seemed to give him additional ones he doesn’t necessarily hold.

“I heard what Josh Hawley said earlier,” said Hume. “I’m not sure that that kind of criticism, that kind of partisan criticism is what the people are looking for right now, but obviously there’s an opening there. After all, the invasion happened. Biden and all the other Western leaders were trying to stop it from happening and they didn’t.”

He added that Russian President Vladimir Putin has gotten the West “hooked” on Russian energy resources.

“And the United States, with its energy potential – not only the production we now have, but the production we could have – could really help to wean the West off that,” he continued. “It would be quite something if Biden were to say, you know, ‘I’m going to do everything I can to get our country to ramp up energy production.’”

He said it would be a “bold step,” but added, “I don’t think he’ll take it though because his party won’t like it and they’re still addicted to their green dreams.”

Watters replied, “So you’re saying the president of the United States has a opportunity to crush the Russian empire with energy policy, with weapons and aid funding to the Ukrainians, and a sanctions package, and he probably won’t do it because of pressure from the left wing of his party?”

“Jesse, that exactly isn’t what I said,” he responded. “What I said was that he could help this country’s energy situation, make it more secure, help our economy, and help the Western alliance – the nations within the western alliance, particularly Germany who are so dependent on Russian energy to get off that dependency. Now, obviously the effect of that would be to weaken Putin and weaken his grip on western Europe. The rest of it is stuff you threw in there that I didn’t say.”