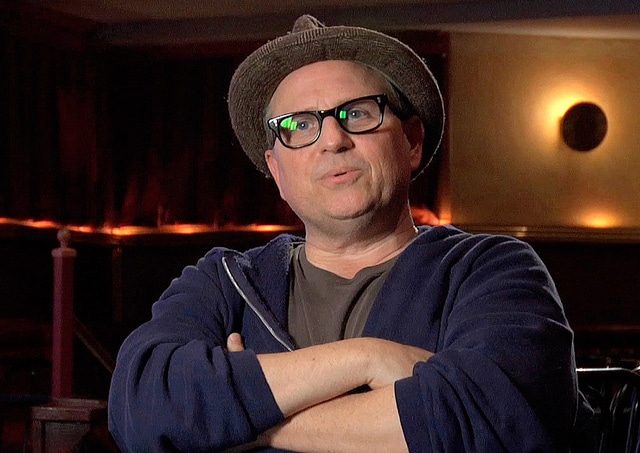 In the first episode of Bobcat Goldthwait’s Misfits & Monsters, a new anthology series premiering Wednesday on truTV, Seth Green plays a voiceover actor whose popular cartoon creation, Bubba the Bear, is literally trying to kill him.

“I thought maybe it had something to do with my friend Tom Kenney,” Goldthwait says, referring to the voice of Spongebob Squarepants. “But the reality is that he loves Spongebob and they have a healthy relationship.” It wasn’t until later that Goldthwait’s daughter Tasha, who serves as a costume designer on the show, told him, “Don’t you get it? That’s you.”

She was talking about the comic persona that defined Goldthwait’s stand-up career throughout most of the the 1980s and ‘90s. During the original comedy boom, Goldthwait shot to unlikely superstardom by playing a deliberately loud and obnoxious version of himself who actively alienated his audience at every opportunity.

Goldthwait has just come from taping an episode of the WTF podcast in his friend and collaborator Marc Maron’s new garage. With his white goatee, black-rimmed sunglasses and large white cowboy hat, he could pass for any other aging hipster in the swiftly gentrifying L.A. neighborhood of Highland Park. His soft-spoken voice bears almost no trace of his iconic onstage character.

“I’m never going to be able to change people’s perception of me,” he tells me, slowly sipping from a tall mason jar of cold brew coffee at a sidewalk table. Goldthwait realized that the episode is about him “accepting” that fact and moving forward. “I don’t really spend too much time being consumed with that,” he says. “I’m just really into telling stories. And doing an anthology series gave me the chance to do a whole bunch.”

The show’s second episode features David Koechner as a Donald Trump-esque used car dealer-turned-politician who gets elected president even after voters find out he’s a murderous werewolf. Goldthwait wrote the script after watching Trump win the 2016 election despite the release of the Access Hollywood “grab ‘em by the pussy” tape. “It’s how I see the world,” he says of the show’s uniquely satirical perspective. Future episodes will feature comedians Michael Ian Black as Satan and Bridget Everett as a racist mermaid.

From the time he was a young kid growing up in Syracuse, New York, Robert Francis Goldthwait loved stand-up comedy. He remembers being nine years old and watching George Carlin perform on Dinah Shore’s show. When he realized that people actually made a living telling jokes, he says, “a light went on” in his head. Soon, he discovered more experimental comics like Andy Kaufman and Brother Theodore.

“My early stand-up was more making fun of stand-up,” he explains. “I’d go on stage and read a ‘Dear John’ letter and break down in tears.” Then he’d start telling a joke like, “My wife is so fat,” to which the audience would reply, “How fat is she?” Goldthwait would shout back, in his high-pitched squeal, “I told you, I don’t even have a girlfriend!”

Despite his unexpected rise to fame, Goldthwait has learned over the years what it is like to be hated, especially whenever he dares get political. “Every time I go to a march or a rally and I post it on Instagram, people will go, ‘I’m going to unfollow you!’” he says. “And I’m like, I used to play arenas. I’ve lost a lot of fans. I’m fine with that. I’ve had people unfollowing me for years, you’re way behind the times.”