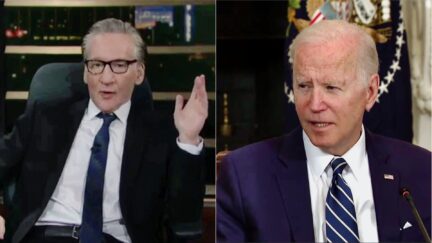 Comic and pundit Bill Maher said President Joe Biden needs to realize immigration is a “big fucking deal” for U.S. elections, and cited the presidential election in France as evidence.

On Friday night’s edition of HBO’s Real Time with Bill Maher, the host spoke with guests former Senator Doug Jones and MSNBC host Ali Velshi about the prospect of a Democratic bloodbath in the midterms. Maher raised the immigration issue, and cited Marine Le Pen’s 18-point loss to French President Emmual Macron as evidence, saying she’d been “within striking distance” of a win:

BILL MAHER: So what about the other big “I” issue, which is immigration? I… Joe Biden famously used the phrase big fucking deal. What is he going to understand? This is a big fucking deal. It is. We just had an election in France, and Macron pulled it out pretty handily. But I mean, Marine Le Pen is, you know, started at nothing and now she’s.

BILL MAHER: I mean, you know, within striking distance. And this is the same issue as Brexit in England. This is same issue as Trump voters in America. I mean.

ALI VELSHI: Orban just won an election in Hungary on the same issue.

BILL MAHER: Yes. But I mean, this is France. Yeah. And, you know, working-class voters feel like they’ve been ignored and abandoned. And when I’ve been to France, they certainly were ignoring and abandoning me. I seem to remember that about France. But that is a reasonable argument, that there’s this elitist group that’s running the world that’s left us behind.

DOUG JONES: Yes. Look. And people think that to some extent about Democrats. Democrats have lost their way in the sense that they have not been talking to mainstream America. They’ve been talking to urban this and this group and a coalition. But they have lost their way talking to to rural America, to folks and on Main Street. We have got to get back to giving those message. You talk about inflation and all. We need to be talking to those folks to say, look, we are working, we are doing things, we’re releasing oil, we’re doing this. The Fed is doing that. Rick Scott is proposing to tax you… His proposal is to tax people under $50,000 to raise their taxes. We’ve got to get that message out to folks.