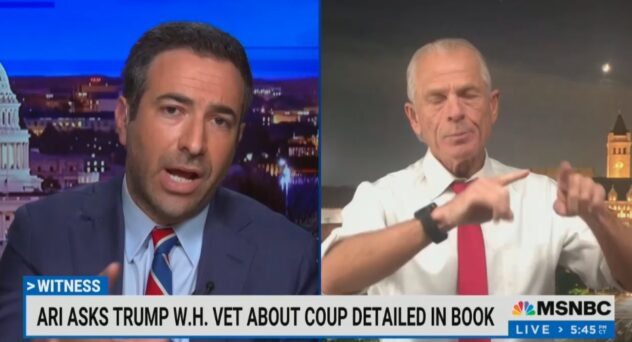 Tuesday’s edition of the The Beat with Ari Melber went sideways when the MSNBC host interviewed former Trump White House economic adviser Peter Navarro. Navarro has falsely claimed that the 2020 election was rigged against Donald Trump.

Melber played a clip of former Trump adviser Steve Bannon using a reference to the old Packers Sweep football play while explaining how he thought the election could have been overturned on Jan. 6 when Congress convened to certify the election.

“What was the plan and who was in on it besides you Bannon and Trump?” Melber asked.

Navarro responded that he had compiled an extensive report.

“I went over tens of thousands of pages of documents and proved that the election was in all likelihood stolen through fraud and election irregularities,” he said.

After some crosstalk, Melber restated his question: “What was the plan itself and who was in on it?”