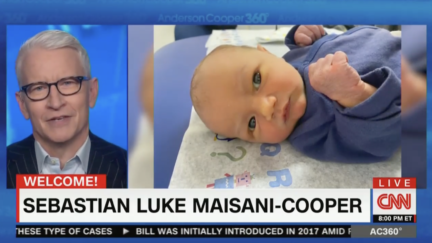 Anderson Cooper announced the birth of his second son Thursday on CNN before exiting his prime time show to take some time off.

“We have a lot to get to tonight, but I want to start off with good news, which also happens be personal news,” Cooper said. “In early 2020, in the dark days of the pandemic, I announced the birth of my son Wyatt.

“The pictures I showed were Wyatt taken just days after he was born. This is Wyatt today. He’s nearly 22 months old and he is sweet and funny and the greatest joy of my life. If he looks particularly happy in this picture, it is because he now has a baby brother.”

Cooper then displayed a picture of his eldest son and his new baby: