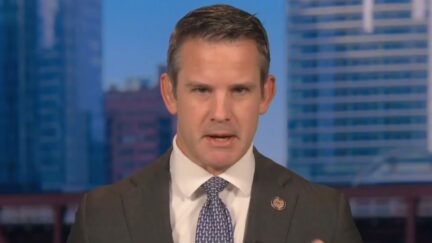 Rep. Adam Kinzinger (R-IL) hit back at Newsmax host Eric Bolling on Friday, after the right-wing TV personality called him a “traitor” and suggested he switch parties.

The Twitter spat started with Kinzinger giving an interview in which the outgoing congressman said he wants “this party to be better” and vowed to help defeat former President Donald Trump if he chooses to run again in 2024.

“If Donald Trump gets the Republican nomination there are many of us that will move heaven and earth to ensure he doesn’t win. I think that’s the most important thing. He cannot be president again,” Kinzinger said.

The clip was shared on Twitter by Breaking911, an internet trend monitoring account. Bolling then reshared the clip with the caption, “Switch parties you traitor.”

Kinzinger, who has been prolific in feuding with his opponents on Twitter in recent months, quickly responded.

“Good morning Eric! How is that cult going? The whole Russia thing was a bad bet for your leader,” Kinzinger wrote, referencing Trump’s recent controversial comments calling Vladimir Putin “savvy” and a “genius” in regard to his brutal invasion of Ukraine.