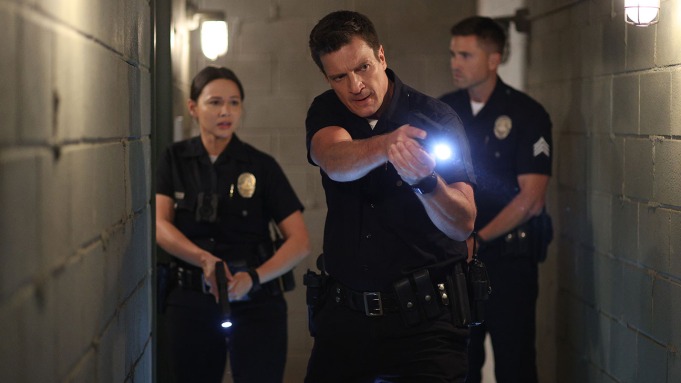 ABC cop drama The Rookie is banning “live” weapons on its set, effective immediately, following the fatal shooting on the set of Alec Baldwin’s Rust.

Showrunner Alexi Hawley led the charge for the change as sources say he informed ABC executives that production would no longer be using quarter or half loads while filming the Nathan Fillion-led drama. The series has, over the past two seasons, primarily used CGI to portray muzzle flashes but occasionally used “live” weapons on “big, outside set pieces.” That policy ended Friday as Hawley sent a memo to staff, exclusively obtained by THR, outlining the changes designed to improve the safety on the set of the Entertainment One and ABC Signature series.

“As of today, it is now policy on The Rookie that all gunfire on set will be with Air Soft guns with CG muzzle flashes added in post,” Hawley wrote in the memo (read it in full, below). “There will be no more ‘live’ weapons on the show. The safety of our cast and crew is too important. Any risk is too much risk.”

Air Soft guns are effectively BB guns that use a form of pellet instead of bullets, meaning they produce less energy than a gun. They’re often used on film and TV sets as they look almost identical to other guns.

Hawley notes that The Rookie had used a mix of guns with mostly quarter loads or Air Soft guns with CGI muzzle flashes added in postproduction. As Emmy-winning VFX artist Nick Sinnott (What Lies West) noted on Twitter late Thursday, adding muzzle flashes in post “are as good as the real deal” and are “the easiest thing” to add — especially considering “video can’t even capture them correctly.” “[There’s] zero reason to use live rounds.”

The change comes a day after director of photography Halyna Hutchins, 42, died after being injured on the set of Western Rust when a gun was discharged by star/producer Alec Baldwin. Baldwin on Friday expressed “shock and sadness” over the incident in which the gun he was handling misfired, killing Hutchins and injuring director Joel Souza.

Baldwin is cooperating in the investigation by Santa Fe officials. No charges have been filed. Production on the film has been suspended indefinitely. Local authorities are investigating how and what kind of projectile was discharged. The production company behind the movie said in a statement that the “accident” involved the misfire of a prop gun with blanks.

Chris Wallace Calls Psaki ‘One of the Best Press Secretaries Ever,’ Says Peter Doocy Is ‘The Sam Donaldson’ of Biden Admin