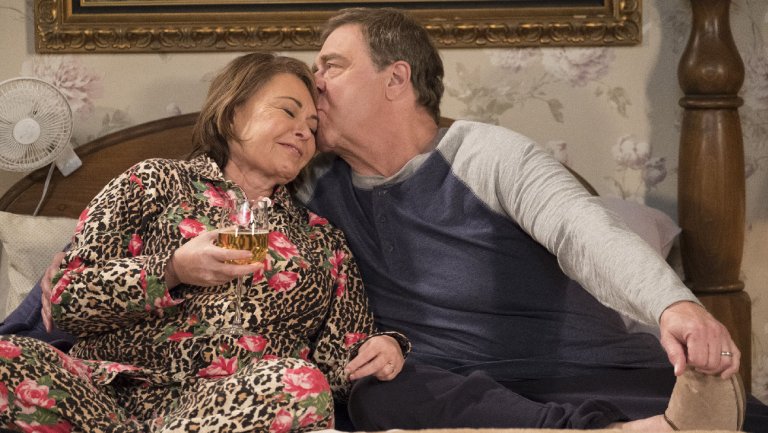 The proposed Roseanne spinoff is still very much alive at ABC, and negotiations are said to have moved to a new phase thanks to concessions from its erstwhile star.

Sources tell The Hollywood Reporter that Roseanne Barr has agreed in principle to walk away from the characters she helped create in order to allow Roseanne’s cast and crew to pursue a spinoff in thewake of the show’s May cancelation due to her racist tweets.

ABC and producer Carsey-Werner are insisting that Barr not participate financially or creatively in the proposed spinoff, which is said to revolve around the character played by Sara Gilbert. Other Roseanne writer-producers and cast members, including John Goodman and Laurie Metcalf, are said to be tentatively on board (they would receive the same fees as previously negotiated for the second season of the Roseanne revival, which was ABC’s top-rated program this season).

But since Barr would be entitled to substantial fees and backend on any spin-off of Roseanne (the original series was created by Matt Williams but it is also credited as being “based upon a character created by Barr”), she must waive those rights before any such show could proceed. With Roseanne having tentatively agreed to do so, now the negotiation is over what, if any, one-time payment Barr should receive as “go-away money,” as one source puts it.

ABC and Carsey-Werner declined to comment, and sources caution that the precarious nature of the negotiations and Barr’s volatile disposition could change the situation before a deal is closed. Even if Barr signs off on the spinoff, ABC would still need to pick it up officially, though that is highly likely given the tune-in for Roseanne this season. ABC has yet to announce what will replace Roseanne in the 8pm Tuesday time slot in the fall.

Barr, who saw her successful show imploded by her racist tweet directed at former Obama aide Valerie Jarrett, is said to be apologetic to her show’s cast and crew but she hasn’t taken 100 percent responsibility for the show’s demise. And even though she would be cut out of participating in the spinoff, Barr will not lose any financial stake in the previously produced 10 seasons of the show.

As previously reported, the current plan is to revisit the show while shifting focus to Sarah Gilbert’s character Darlene. Gilbert, an executive producer on the recent reboot, was instrumental in getting the gang back together for the now one-off revival season. Goodman (Dan) and Metcalf (Jackie) are also expected to return, as is the rest of the cast (save Barr). Behind the camera, much of the creative team and writing staff are also expected to be on board — showrunner Bruce Helford included. Executive producer Tom Werner, whose Carsey-Werner owns the IP, has been involved in the negotiations. Werner’s longtime partner, Marcy Carsey, meanwhile, recently said that she wouldn’t try to revive the series following its cancellation.

The spinoff would give ABC its marquee premiere for the 2018-19 season back, even if in a different iteration, and would help the network avoid the many payouts it was on the hook for. At the very least, the trio of Gilbert, Metcalf and Goodman expected to be paid for at least 10 episodes of the scrapped 11th season, since their options had been exercised for a $300,000-an-episode salary. (Still unclear is what happens to the writing staff, including Helford, if the new series should fall through.)

How Deadpool Went From LAME To LIT

Beyoncé and Jay-Z’s Everything Is Love Lyrics: Cheating, Forgiveness and the Carters on Top