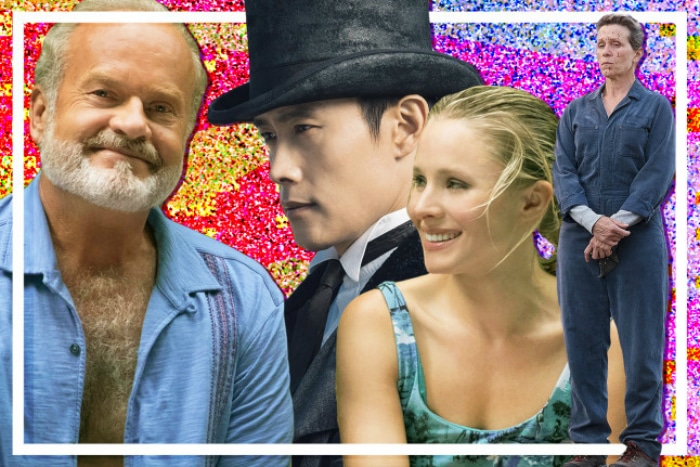 TGIF, y’all. You did the damn thing and made it to the weekend, and you deserve to celebrate with the best the streaming world has to offer.

This weekend, there are so many new titles hitting Netflix, Hulu, Amazon Prime Video, and HBO that you’ll practically have to pull yourself away from your TV. Nothing pairs with a Saturday night in than an Academy Award-nominated drama, and luckily, critical darling Three Billboards Outside Ebbing, Missouri lands on HBO this weekend. No matter your mood, Frances McDormand’s Best Actress-winning performance in Three Billboards will move you to tears.

Looking for something a bit lighter? Netflix is continuing their rom com reign with Like Father, a comedy starring Kristen Bell, Kelsey Grammer, and Seth Rogen. Bell plays a high-strung woman who decides to go on her honeymoon cruise despite being left at the altar (as if that would ever happen). When her estranged father agrees to tag along, the two embark on a journey — quite literally — of self-discovery and healing. It’s certainly not Oscar-worthy fare (Like Father is no Three Billboards), but if you’re interested in a low-key rom com, it’ll do the trick. Curious what else to watch? Here’s what’s new on streaming this weekend.

Seven months after Mildred Hayes’ (Frances McDormand) daughter was brutally raped and murdered, little progress has been made on her case. In order to help the police along, Mildred puts up three billboards outside her small hometown of Ebbing, Missouri that say “RAPED WHILE DYING“, “STILL NO ARRESTS?“, and “HOW COME, CHIEF WILLOUGHBY?” Mildred’s billboards quickly become the talk of the town, and Chief Willoughby, who has his own secrets, flounders as he attempts to quiet things down. With amazing performances from McDormand, Sam Rockwell (he won Best Supporting Actor for the role), Woody Harrelson, and others, Three Billboards is an important, enthralling watch.

Kelsey Grammer and Kristen Bell play an unlikely father-daughter duo in Like Father, Netfilx’s newest Original film. When Rachel is suddenly left at the altar, she decides to go on her honeymoon cruise to unwind, but that plan goes out the window when her estranged father decides to join her onboard. As Rachel and her father attempt to rebound from years of tension, the two become friends with some of their fellow cruisers, and Rachel even gets flirty with one of the guys (Seth Rogen). Like Father is a great addition to Netflix’s romantic comedy library, so be sure to stream the funny flick this weekend.