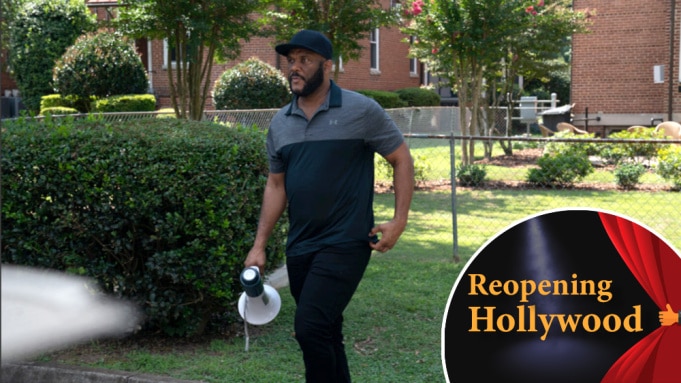 Tyler Perry has always been a maverick, rising from a struggling writer-performer to a film and TV mogul and studio owner. Speaking with Deadline over the weekend, Perry shared a plan to get production on his multiple TV series up and running in June at his Atlanta-based Tyler Perry Studios with a strict protocol that involves testing and sequestering the shows’ cast and crew on the sprawling lot.

While the idea of quarantining the cast and crew of a show on a lot for several weeks at a time (ala a drama camp) has been floated before, what makes it feasible for Perry is the way he produces his TV series, which he writers and directs. One 22-episode season of a Tyler Perry series is shot in 2 1/2 weeks. Compare that to the eight months it takes for a broadcast series to shoot a 22-episode season (including hiatuses). His shows film entirely on the lot, which feature elaborate exteriors and interiors, including a replica of the White House. And it includes ample housing on the premises.

As Hollywood TV studios mull ways to safely resume production, this may be a time to also rethink the way production is done in terms of setup and efficiency. Perry cautions that the plan could be derailed if he cannot get even one of the key approvals he is seeking from the casts, the unions, the Mayor, the insurer and the CDC, among others. But he hopes that, if his plan comes to fruition, other studios could draw from it.

In the days leading to the planned March 16 production start of Season 2 of Tyler Perry’s BET series The Oval at the Tyler Perry Studios, Perry was closely monitoring the escalating coronavirus outbreak in the U.S.

“I was growing more and more concerned, so I decided to shut down the studio a few days before our production start, just to keep everybody safe,” Perry told Deadline. That was a week before Atlanta Mayor Keisha Lance Bottoms announced a stay-at-home order for the city and more than two weeks before Georgia Gov. Kemp issued a statewide shelter-in-place executive order.

As Perry made the decision to suspend production, he was already thinking ahead. “Many people in Georgia depend on these jobs for their livelihood. I started thinking about what a return would look like and how I could create a safe environment so people could work again with some peace of mind,” he said.

“My initial hope was to have rapid testing — five-minute test results and then everyone cleared goes to work. When I saw that, I thought that was a game-changer. But upon a lot of investigation I realized that there wasn’t the reagent for the rapid test, there wasn’t the swab for the test, there weren’t the cartridges for the test, so everything that had the promise of the test on a federal level turned out not to be so.”

Howard Stern Says He’s All In For Joe