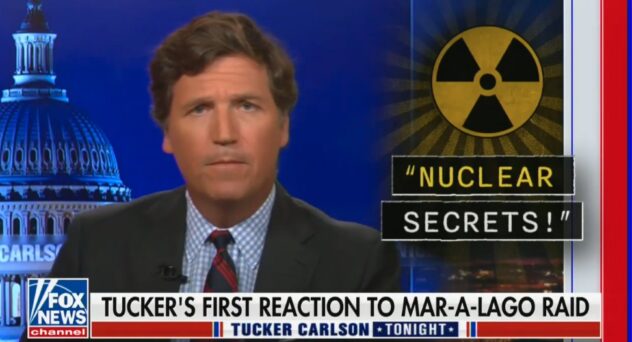 In 2001, an aide to Scarborough named Lori Kaye Klausutis, 28, was found dead in the then-congressman’s office in Fort Walton Beach, Florida. There were no signs of foul play and a medical examiner ultimately concluded she fainted due to a heart condition. During the fall, her head fatally struck a desk.

Carlson alluded to the death during his monologue on Monday night while talking about the FBI search of former President Donald Trump’s Mar-a-Lago residence last week.

“There was endless huffing on television about something called ‘the rule of law” and how absolutely no one is above that, no one, not even a former president!” Carlson stated. “Keep in mind, no one is above the law. That was definitely the word from Joe Scarborough, a man who was accused of committing murder while serving as a member of Congress, yet somehow moved seamlessly to the MSNBC lineup without being charged or even investigated.”

Scarborough was never a person of interest in Klausutis’ death and no foul play had ever even been suspected.

This isn’t the first time Carlson has suggested Scarborough murdered his former aide. In February, he said of Scarborough, “some say he’s an absolute killer.”