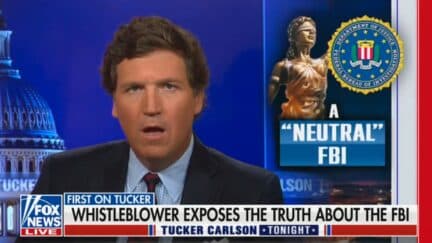 Tucker Carlson characterized the Jan. 6, 2021 gathering at the U.S. Capitol as “a nonviolent election justice protest” and downplayed the violence committed there as mere “vandalism.”

On that day, a mob of Donald Trump supporters stormed the Capitol as lawmakers were certifying the results of the 2020 presidential election won by Joe Biden. Trump falsely claimed the election had been stolen from him and encouraged supporters to march to the Capitol that morning. His supporters ultimately breached the building, where some of them physically assaulted law enforcement officers as they tried to stop certification, which they did for several hours.

Four people died. Additionally, a 42-year-old police officer who was sprayed with an unknown substance at the Capitol died of a stroke the next day. Ashli Babbitt, a Trump supporter, was shot by police in the shoulder and died.

Carlson claimed on Monday that the FBI is opening up “domestic terrorism investigations” into innocent Americans, calling the probes “entirely fraudulent.”

The Fox News host slammed the agency and described Jan. 6, 2021 in one of the most charitable ways conceivable: